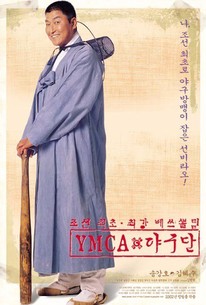 An oddball group of unlikely athletes become Korea's winning force in baseball in director Kim Hyun-seok's YMCA Yagudan (aka YMCA Baseball Team). When Ho-Chang (Song Kang-ho) loses a ball and sneaks into the yard of an American missionary in an attempt to retrieve it, he catches his first glimpse of the sport that will soon change his life and lift the spirit of his downtrodden nation. Soon learning that the lovely Jung-rim (Kim Hye-su) is currently in the process of organizing Korea's first baseball team, Ho-Chang eagerly signs-up along with best friend Kwang-tae (Hwang Jeong-min) and Dae-hyeon (Kim Ju-hyuk), who also strives for Jung-rim's affections. Despite his father's wishes that he follow a more scholarly path, Ho-Chang and his team are soon at the top of their game. As Korea begins to feel the bleak realities of the Ulsa Treaty and the team's playing grounds are usurped by Japanese soldiers, one game may prove a nation's final hope to achieve triumph in the face of adversity.

There are no critic reviews yet for YMCA Baseball Team. Keep checking Rotten Tomatoes for updates!

There are no featured audience reviews yet. Click the link below to see what others say about YMCA Baseball Team!