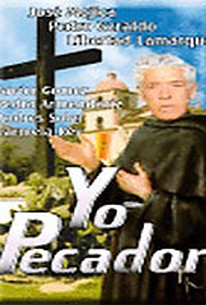 This well-balanced film is based on the life of Jose Mojica (Pedro Geraldo), a Mexican entertainer who gave up the stage for a monk's robe and tonsure. As young Mojica's star is rising in the entertainment world he indulges in some very unpleasant personality traits -- a serious ego, arrogance, and unstable temperament plague his relationships. But then circumstances conspire to slowly wake him up, not only making him realize the errors in his attitude and behavior, but bringing him even further to the conclusion that nothing the material world has to offer is worth it. And so Mojica becomes a Friar, a monk whose life starts to touch others in a meaningful way. Libertad Lamarque plays his mother and equally famous Pedro Armendariz plays a man affected by Mojica. ~ Eleanor Mannikka, Rovi

Critic Reviews for Yo Pecador

There are no critic reviews yet for Yo Pecador. Keep checking Rotten Tomatoes for updates!

There are no featured reviews for Yo Pecador at this time.