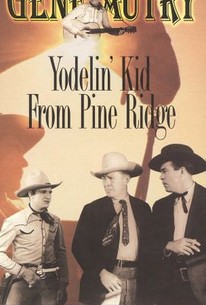 The prolific Jack Natteford wrote this unusual Gene Autry Western -- or, to be accurate, "Eastern" -- which reportedly suffered cuts after censors found it too violent. Gene, as usual, plays Gene Autry, this time the son of a Georgian cattleman (Charles Middleton) waging a war against the areas "turpentiners," harvesters of pine tree sap. Disowned by his father after siding with the turpentiners, Gene takes up with Colonel Millhouse's (Smiley Burnette) traveling Wild West Show. The show returns to Pine Ridge two years later and Gene discovers that a gang of rustlers is now using the turpentiners as a cover for their crimes. While Gene is occupied with the rustlers, the Wild West Show audience grow restless and Millhouse sends in an imposter (Art Mix), who mimes to a recording of Autry's voice. The leader of the rustlers, Len Parker (LeRoy Mason), takes this opportunity to get rid of his enemy and has the imposter killed. The real Gene, meanwhile, finds his father murdered by what appears to be someone connected by the leader of the turpentiners, Bayliss Baynum (Russell Simpson), and when Autry Sr. is likewise found slain, Gene becomes the natural suspect. The turpentiners demand swift justice, but Gene manages to track down the real culprit with the aid of Baynum's daughter, Milly (Betty Bronson), and the Wild West Show performers.

Charles B. Middleton
as Autry Sr.

Tennessee Ramblers
as themselves

Oscar Gahan
as Turpentiner
View All

The enjoyable Western has plenty of action, decent comedy and good songs by Gene

There are no featured reviews for Yodelin' Kid from Pine Ridge at this time.