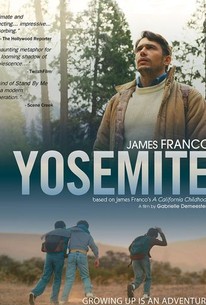 It's the autumn of 1985. In intertwining tales by James Franco, three 5th grade friends, Chris, Joe and Ted, unfold in the suburban paradise of Palo Alto. Chris drives up to Yosemite for the weekend with his dad (James Franco) and discovers a corpse in the woods. Joe, left to his own devices by his babysitter, befriends a lonely drifter who shares his love of comic books. Meanwhile, a mountain lion is spotted in Palo Alto in broad daylight and Ted searches for his cat, who has gone missing Based on the short stories "Yosemite" and "Peter Parker" from James Franco's collection A California Childhood.

Although evocative and nicely observed, the coming-of-age drama "Yosemite" ultimately proves too low-key and elliptical to make much of an impression. "Stand by Me" it ain't.

The movie succeeds on its own quiet terms, binding the three parts together with assurance and tonal consistency to cast a lingering spell.

Franco gives one of his most subtle performances yet as a recovering-alcoholic father, and the three young newcomers' performances are honest and affecting.

The material aspires to powerful terseness, but its seemingly conscientious refusal to ramp up too much drama ultimately renders it thinly anecdotal.

Yosemite mines Franco's fiction for its most vital quality: his unsentimental depiction of youthful insecurity, this time among fifth-graders.

Yosemite is a small but touching film, and has given voice to a new and interesting talent in Gabrielle Demeestere.

An earnest examination of the loss of innocence this critic might have appreciated even more if the subject-matter hadn't be so relentlessly dark and disturbing.

While many may find its slow pace and lack of action a bit frustrating, Yosemite is a thoughtful and well-executed coming of age indie...

It's an interesting effort with a clear portrait of pre-adolescent curiosity, but it's not something to be viewed casually, as the feature's patience with tone takes some getting used to.

Where STAND BY ME pressed its characters' faces into the stink of mortality, the boys here have yet to even hear the news about a dead body down by the train tracks.

There are no featured audience reviews yet. Click the link below to see what others say about Yosemite!