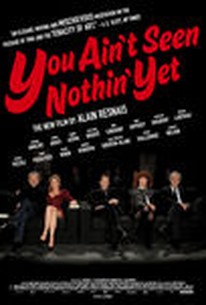 You Ain't Seen Nothin' Yet! Photos

Based on two works by the playwright Jean Anouilh, YOU AIN'T SEEN NOTHIN' YET opens with a who's-who of French acting royalty being summoned to the reading of a late playwright's last will and testament. There, the playwright (Denis Podalydès) appears on a TV screen from beyond the grave and asks his erstwhile collaborators to evaluate a recording of an experimental theater company performing his Eurydice-a play they themselves all appeared in over the years. But as the video unspools, instead of watching passively, these seasoned thespians begin acting out the text alongside their youthful avatars, looking back into the past rather like mythic Orpheus himself. (c) Kino

Fulvia Collongues
as The Mother

Vincent Chatraix
as The Father

Lyn Thibault
as The Young Girl

Gabriel Dufay
as The Hotel Waiter
View All

Critic Reviews for You Ain't Seen Nothin' Yet!

Resnais breaches multiple conventional boundaries- between ancient and modern, theater and film, and even life and death-and embraces digital postproduction to create a marvelously fluid cinematic space that extends his lifelong surrealist project.

What affects us most is Resnais's ingenious idea. And that affect is magnified by a surprise ending.

Resnais' occasional use of split-screen and other traditional special effects enhances the picture's various dualities, dreamy quality and decided staginess.

Despite some hyperbolic excess, the process of Resnais' production is unexpected and free, and revisits the very nature of cinema, and theater, with a wondrous eye.

There is something both mischievous and moving about a world-famous director who, closing on his 10th decade, designs a movie that celebrates his actors: their varying ages, their versatility, their heart.

"You Ain't Seen Nothin' Yet" is a sly, elegant meditation on the relationship between reality and artifice. But it is a thought-experiment driven above all by emotion.

Resnais displays an immaculate instinct for when to use which actors, ... and [how to use sound] to elicit the emotions that on stage would emerge from variations in volume.

Among other things, the movie serves as a kind of rehearsal for an elegy, enacted in various permutations not because of memory's regenerative warp and woof after the fact, but because of imagination's possibilities before anything has ever happened.

... there was a wholly unwarranted air of the posthumous about You Ain't Seen Nothin' Yet, which is as eccentric and alive as its immediate predecessor.

This is the film I will remember as Resnais' final word on love, life, and art.

Beautiful, difficult, frustrating, and engrossing, You Ain't Seen Nothin' Yet is an undeniable accomplishment of form and experimentation.

Audience Reviews for You Ain't Seen Nothin' Yet!

The theatricalization of Cinema as intended by Resnais may be absorbing at first as it explores a touching sense of nostalgia from the characters/actors, but this scene play is not compelling enough to deserve two hours, becoming artificial and vapid after a while.

In "You Ain't Seen Nothin' Yet," famed playwright Antoine d'Anthac(Denis Podalydes) has died. His last request is for some of his favorite actors and other creative collaborators to meet at his house. What he would like them to do is judge a new version of his play "Eurydice" performed by a warehouse theatre group who apparently spent most of their budget on a cool looking pendulum. Even with one seriously wonky framing sequence, director Alain Resnais, with his penultimate film "You Ain't Seen Nothin' Yet," turns two of his favorite obsessions, theatre and surrealism, into a mindblowing experience. Throughout the body of the movie, with a little help from split screen, he seamlessly combines three productions of a play(starring Sabine Azema & Pierre Arditi, Anne Consigny & Lambert Wilson and Vimala Pons & Sylvain Dieuaide respectively) that occasionally inhabit the same space.(Thus proving we have to find out to how to clone Mathieu Amalric.) This is no mere experiment as it allows the viewer to not only see the differences in various adaptations but more specifically in how the actors interpret the work.

I'd be tempted to think the film was all just some pretentious exercise if it wasn't so moving. Resnais (who's 91 by the way) has put together something totally remarkable here, as he combines so many different styles and still manages to make the film thematically consistent.

You Ain't Seen Nothin' Yet! Quotes