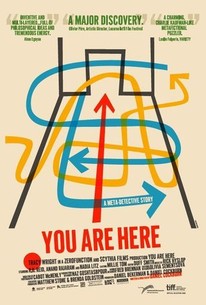 You Are Here Photos

An obsessive, self-styled "Archivist" roams the city collecting strange objects and documents. Each of the documents is an artifact from a distinct but parallel world; a map from a corporation whose only purpose is to track the whereabouts of its employees, a video made by a scientist who forgot that he was the subject of his own experiment, an artificial eye that allows people to see a common vision... When these other worlds begin to undermine the stability of her own, she is forced to leave the safety of her archive and trace the disturbance to its source. -- (C) Official Site

Tracy Wright
as The Archivist

R.D. Reid
as The Lecturer

Anand Rajaram
as The Experimenter

Nadia Capone
as The Assistant

Hardee T. Lineham
as The Philosopher

News & Interviews for You Are Here

View All You Are Here News

Critic Reviews for You Are Here

A twisted exegesis on the dissolution of identity, the disappearance of will, and, eventually, the loss of mind.

Some will find the film compelling, but underneath the riddles it's basically a self-important proclamation of "who the hell knows?"

Moments of insight flare like fireflies and disappear, whether from underfinancing or overambition is unclear.

Smart, anxious and weirdly funny, the first feature from Toronto video artist Daniel Cockburn connects a series of scenarios that gradually begin to loop into each other.

Meticulously conceived, shot and edited, it's Cockburn's first feature after a string of well-received shorts, and it's quite the calling card.

A thought-provoking experience, and hopefully just the beginning of Daniel Cockburn's career in filmmaking.

Cockburn poignantly finds a strange expression for how people think, the thoughts that we think no one else will understand, and our attempt to interpret the world around us.

If one definition of an "art film" is that you still have no idea what's going on halfway through, then You Are Here is definitely an art film, so successfully does it defy one's need for things to make sense.

Cockburn is inviting us into his head, to think about the things he never stops thinking about. It's kind of nice in there.

A non-narrative, abstract meditation on the processes of the mind that is intellectually stimulating, as well as charming and playful.

It all feels as though a dash of the surreal has been woven into moments of banal human experience to see how far reality bends before it snaps.

Audience Reviews for You Are Here

This pile of garbage should have seen its death at the Film Festival. Now it will disappoint a larger audience with a broader release. A bunch of disjointed surreal scenes signifying nothing under the direction of one of the most narcissistic people I have ever encountered. May grant money find more rewarding projects.

You Are Here Quotes