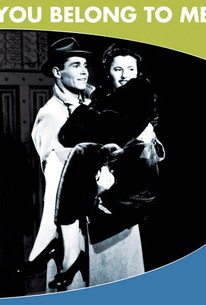 This romantic comedy begins at an alpine resort where a handsome fellow sees a beautiful girl while skiing, suffers and embarrassing accident and then finds out that she is a prominent doctor. Though total opposites, they marry. As he is independently wealthy he doesn't need to work, but she, a chief-of-staff at a busy hospital is totally involved in her career. This creates friction, for with so much free-time, the husband begins growing terribly jealous. It does not help that many of her patients are handsome virile men. He begins bugging his wife to death; she gets fed up, and in desperation to save their marriage, the former playboy decides to do something new--get a job. Unfortunately, he soon finds out that getting and keeping a job isn't as easy as it sounds.

Critic Reviews for You Belong to Me

There's an abundance of funny situations and not one single boring moment in the movie. [Full Review in Spanish]

Audience Reviews for You Belong to Me

I adore Barbara Stanwyck, but this one is a real stinker folks. Fonda is whiny, histrionic, and tedious in the role of a millionaire who marries a doctor (Stanwyck), only to get immediately jealous of the demands on her time, and her male patients. Stanwyck has some nice lines ostensibly standing up for women's rights early on, but all that is thrown away as she caves in for the silliest of reasons. She is completely unbelievable as a doctor, mainly because of the script. I won't spoil it in case you actually want to watch it (don't!), but you may actually feel vomit creeping up in your throat as the story plays out, that is, unless you're hooting at the screen too hard. Ah, the poor rich white man, with wives not content to stay at home, and unable to take a job lest they displace someone less fortunate from the work force. Even if you suspend disbelief, or cut the movie some giant slack since it was made over 75 years ago, there is no chemistry between Stanwyck and Fonda, and their sudden romance is unbelievable. Even Stanwyck's make-up is bad, with her lipstick well above her lip line in most scenes. It may have been an attempt to make her lips appear fuller, but it looks sloppy and unappealing. The only thing of interest for me was at the very beginning - the scenes on the ski slopes, which, while silly, have the lithe and svelte Stanwyck in her ski pants. Skip this one, and if you're interested in a 1941 Stanwyck film, watch either 'The Lady Eve' (paired with Fonda) or 'Ball of Fire' (with Gary Cooper), both of which were excellent.

Remarkably obscure comedy considering it stars Fonda and Barbara Stanwyck at their peaks. Even if it doesn't measure up to The Lady Eve or The Mad Miss Manton this is still a cute little comedy. Starts out charmingly with Henry at his sheepish befuddled best and Missy her usual take charge dame. It does flounder around about in the middle with Fonda acting like a stupid buffoon but comes back together at the end. While the two leads can carry a picture both on their own and together without breaking a sweat fortunately they don't have to here. They are ably abetted by Edgar Buchanan's folksy reliability, Ralph Peters as trusty butler Joseph and the under appreciated Ruth Donnelly as Dr. Stanwyck's wryly observing nurse. Both leads are at the peak of their attractiveness as well with Barbara looking particular beautiful with loose flowing hair and a smart wardrobe. Difficult to find but worth checking out if you can.

You Belong to Me Quotes