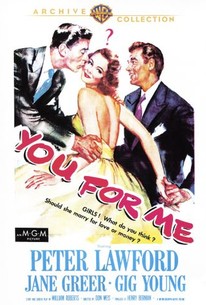 You for Me Photos

You for Me stars Peter Lawford as a profligate playboy who's a nice guy underneath. After suffering a hunting accident which leaves him with a butt full of buckshot, Lawford is interred in the hospital that his donations have kept afloat. Nurse Jane Greer refuses to treat Lawford any better than any other patient, which of course makes him adore her all the more. Gig Young is once more the poor schlemiel who loses the girl--but this time Young deserves it, since he encourages Jane to make goo-goo eyes at Lawford so the donations will keep on coming (there's a word for that sort of thing where we come from, stranger). You for Me was directed by Don Weis, whose MGM films are often so lightweight that they're in danger of floating away. ~ Hal Erickson, Rovi

Critic Reviews for You for Me

There are no critic reviews yet for You for Me. Keep checking Rotten Tomatoes for updates!

Audience Reviews for You for Me

There are no featured audience reviews yet. Click the link below to see what others say about You for Me!

You for Me Quotes