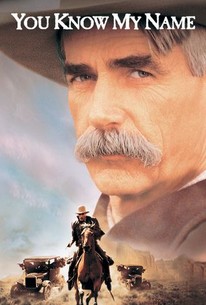 You Know My Name Photos

Produced for U.S. cable outlet TNT, You Know My Name is based on the colorful true story of Bill Tilghman, who went from Wild West lawman to Hollywood filmmaker to lawman again. Tilghman, played by Sam Elliott, was once an associate of Wyatt Earp and had run-ins with such famous outlaws as Cattle Annie and Little Britches. After retiring from law enforcement, Tilghman moved to California and began producing a series of silent Westerns that stressed historical authenticity over the grand-standing heroics of Tom Mix and William S. Hart. However, his films lacked name stars and failed to click at the box office. After his career in film went bust, Tilghman, nearly 70, answered a call from a friend to help him reform Cromwell, Oklahoma. Once called "the most sinful town in America," Cromwell was a place where vice was freely traded in many forms and the only peace officer was a violent, cocaine-addicted tyrant named Wiley (Arliss Howard). ~ Mark Deming, Rovi

Brian Martell
as Reporter
View All

Critic Reviews for You Know My Name

There are no critic reviews yet for You Know My Name. Keep checking Rotten Tomatoes for updates!

Audience Reviews for You Know My Name

When Sam Elliot leaves this world we will say goodbye to the last of the real cowboy actors, as no one plays a western part better then him. Based on a true story Sam plays the part of Bill Tillman who leaves the law business to become an actor but when a town in Oklahoma is running wild with no law, he is asked by the towns people to come cleanup there town. So its back to being a lawmen, with many challenges, worth 4 1/2 stars.

You Know My Name Quotes