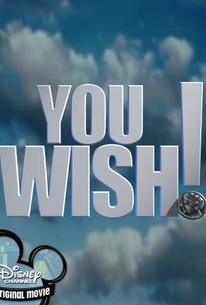 In this adaptation of If I Had One Wish a children's novel by Jackie French Koller, 16-year-old Alex (A.J. Trauth) wishes that his pesky kid brother Stevie (Spencer Breslin) would disappear. This Stevie does -- literally. Belatedly realizing not only that he misses Stevie, but he doesn't really like being an "only child," Alex searches high and low for a way to undo his fateful wish. Looking suspiciously like the pilot for a weekly TV series, You Wish! aired January 10, 2003 over the Disney Channel.

Jay Bunyan
as Charles
View All

Critic Reviews for You Wish!

The strong cast of Disney Channel regulars, with a script by Christopher Reed and Cynthia Carle and note-perfect direction by Paul Hoen, combine to make it one of the best efforts of the basic cable outfit's original-movie franchise.

Audience Reviews for You Wish!

There are no featured audience reviews yet. Click the link below to see what others say about You Wish!!