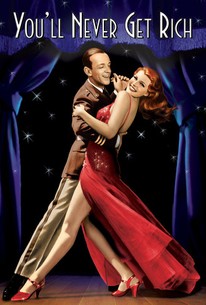 You'll Never Get Rich was the first of two films made by Fred Astaire at Columbia, and also the first in which he was paired with his favorite female dancing partner--not Ginger Rogers or Cyd Charisse, but Rita Hayworth. Fred and Rita play a team of Broadway dancers whose partnership is abruptly rent asunder when Fred is drafted into the Army. Unable to adapt to military routine, Astaire frequently ends up in the guardhouse; during one of these visits, he and the Delta Rhythm Boys collaborate on the lively song-and-dance number "The A-starable Rag." Back to the plot: Rita shows up on the army base as the girl friend of captain John Hubbard. This leads to more fancy footwork, and, of course, a happy ending for our stars. Though the Cole Porter score yielded no hits, one of the songs, "Since I Kissed My Baby Goodbye", was nominated for an Academy Award. Robert Benchley provides comic relief, as he would in the subsequent Astaire vehicle The Sky's the Limit. You'll Never Get Rich was followed by the even better Astaire-Hayworth pairing You Were Never Lovelier.

Frank Ferguson
as Justice of Peace

Rudolph Hunter
as The Four Tone

John Porter
as The Four Tone

Lucius Brooks
as The Four Tone

Leon Buck
as The Four Tone
View All

A film that's easy to recommend based on its stars alone, and the jazzy Cole Porter score makes for a toe-tapping good time.

The first teaming of Fred Astaire and Rita Hayworth has some nice numbers by Cole Porter, but it's not as good a musical as their second and last one.

Lesser Astaire, but still way above average for any musical.

A leaden musical/comedy, built around a series of misunderstandings.

There are no featured audience reviews yet. Click the link below to see what others say about You'll Never Get Rich!