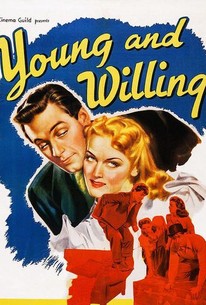 Out of the Frying Pan, Francis Swann's perennial community-theatre favorite, came to the screen under the title Young and Willing. It's the unrealistic but funny account of young, aspiring actors combining their resources in hopes of keeping the wolf from the door. The girls and three boys move into the same apartment-a definite no-no in 1943-hoping to keep the landlady (Mabel Paige) in the dark until they can break into the Big Time. When famed Broadway producer Arthur Kenny (Robert Benchley) moves into the apartment below theirs, our heroes and heroines work overtime to curry Kenny's favor. The male leads are played by William Holden, Eddie Bracken and James Brown, with Bracken coming off as the most entertaining of the three: the girls are portrayed by Susan Hayward, Martha O'Driscoll and Barbara Britton, all on the verge of bigger and better things. Young and Willing was one of a group of Paramount films sold outright to United Artists in 1942-43. ~ Hal Erickson, Rovi

Betty Farrington
as Woman
View All

Critic Reviews for Young and Willing

There are no critic reviews yet for Young and Willing. Keep checking Rotten Tomatoes for updates!

Audience Reviews for Young and Willing

There are no featured audience reviews yet. Click the link below to see what others say about Young and Willing!