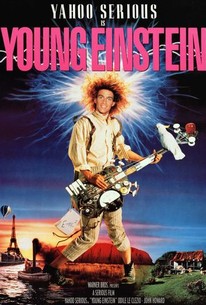 Critics Consensus: Young Einstein suggests Yahoo Serious could be an effective leading man in the right comedic setting -- but this disappointingly uneven outing isn't it.

Critics Consensus: Young Einstein suggests Yahoo Serious could be an effective leading man in the right comedic setting -- but this disappointingly uneven outing isn't it.

Critic Consensus: Young Einstein suggests Yahoo Serious could be an effective leading man in the right comedic setting -- but this disappointingly uneven outing isn't it.

The life of legendary scientist Albert Einstein is re-imagined as a slapstick farce in this comic fantasy. Changing Einstein's country of origin from Germany to Tasmania, the film shows the scientist's eventful youth as he creates rock & roll and discovers the secret of splitting the beer atom. Director and star Yahoo Serious loads the film with slapstick comedy, absurd sight gags, and even sneaks in a romantic subplot in which Einstein courts Marie Curie. The film was a huge hit in its native Australia but a major box-office disappointment in the United States, where audiences largely ignored the display of nonstop silliness.

Lulu Pinkus
as The Blonde

Kaarin Fairfax
as The Brunette

John Even Hughes
as Drunk

Serious's most distinguishing feature is his unruly hair, which serves as both a reminder of Einstein's own unkempt mane and the endless series of '80s-era stand-up comedians memorable only for their wacky hairdos.

The movie runs out of -- excuse me again -- energy in the late going, and the invention of the humor is uneven. But Serious plays the title role with charm and lightness. His wild red hair makes Don King's look like a crewcut.

Considering the pre-opening buildup this film has had, it could turn out to be a bigger bomb than the one Einstein's theory anticipated.

The next Serious movie could well be something special.

It has the charm and advantage of a genuine visual style of its own, both laconic and witty, as well as a likably dopey plot and cast of characters.

A rather lame, awkward and amateurish movie, only fitfully funny and made in such a remorselessly low-brow way that it makes Crocodile Dundee look like Citizen Kane.

Young Einstein is good-natured and harmless, but it's not very funny.

Not all the gags work -- the cat pie-related ones, for instance -- but the whole is clearly the product of an inimitable and engaging talent.

Serious himself is a pleasantly cartoonish screen presence, but he conveys an underlying, offhand intelligence that hints at an acute familiarity with his subject.

A five-minute idea stretched bloodily over 90 minutes of dead air.

I couldn't even make it through this movie! Did anyone?

The most fun movie I've watched in years. Kinda like Bill & Ted meet Bill Nighe. I really just wanted to say that cause it sounded cool.

This movie was hyped in 1988 more than "Jason Goes to Manhattan" ever was! Yahoo Serious was a quirky Australian comic akin to Pee-Wee Hermann and Napoleon Dynamite. I wonder if he inspired Yahoo.com?? Regardless, he appears in a quiet little comedy about his exploits and inventions in the small town in which he lives. I liked the scene where they are planning to bake fluffy kittens into huge pies. There's a bit of a love story too. The music isn't too good. Yahoo's hair is red and punkish, like a modern-day Pippi Longstocking. It's worth checking out, but it didn't have me howling with laughter.

Different to believe, Einstein invented not only relativity, but also the electric guitar and surfing, splitting the atom in his spare time.