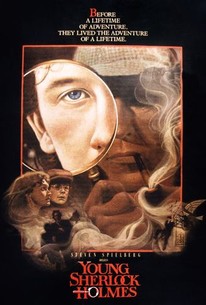 Critics Consensus: Young Sherlock Holmes is a charming, if unnecessarily flashy, take on the master sleuth.

Critic Consensus: Young Sherlock Holmes is a charming, if unnecessarily flashy, take on the master sleuth.

Also released under the title Young Sherlock Holmes and the Pyramid of Fear, this film follows the adventures of young John Watson (Alan Cox) when he is shipped off to boarding school and meets up with the brilliantly bizarre Sherlock Holmes (Nicolas Rowe). The two boys strike up a friendship and promptly become involved in the investigation of a number of mysterious murders. When their curiosity gets them into trouble with a dangerous religious cult, Watson and Holmes must struggle to avoid capture while attempting to notify the authorities.

Michael Cule
as Policeman with Lestrade

... it's a perfectly agreeable family entertainment, a craftsmanlike fantasia on Conan Doyle.

There is something about Holmes's elegant, haunting, and whisperingly melancholic distance, his analytical remove from the world, that inspires a desire for glimpses of the baroque corridors of labyrinthine interiors.

If these story elements seem typical of Conan Doyle, there is also a lot in this movie that can be traced directly to the work of Steven Spielberg, the executive producer.

Time has not been very friendly to this teen thriller that in my household used to be "fantastic". [Full review in Spanish].

This is the origin story for the world's first consulting detective that Conan Doyle was never considerate enough to write for us...

The idea to center on Holmes and Watson as young men is good and original but the execution is rather poor and Levinson's direction is impersonal.

Squanders its start as a charming character study.

Like a peacock showing its bright colours. Sadly, it's all about show, not substance.

Reveals that Holmes' true love is tortured to death in a big-budget extravaganza that provided the bastard sire for Jar Jar Binks.

By the time Young Sherlock Holmes clangs to a close, the assets of the film are buried beneath an avalanche of unnecessary bells and whistles.

definitely worth a better reception than it's received over the years.

Even almost 35 years later there are some really interesting and groundbreaking aspects about this film. First of all, it includes one of the first CGI creatures (the window picture knight) and had a Pixar team working on those effects. It's also worth noting how especially the beginning of Sherlock and Watson meeting at school precursors the Harry Potter films in mood and style, then you realize Chris Columbus wrote this. The film also includes one of the first post credits scenes that I can remember, aiming for a sequel that never came. As far as Sherlock cases go, this is a rather mediocre one made up for the film. During the surprisingly dramatic and action packed showdown our hero climbs, fights and fences more than he's using his brain, that seems a bit out of character. The creators clearly wanted to give him a bit of an Indiana Jones treatment, albeit a mild one. That's still pretty entertaining with quite some wasted potential.

A great all too little known film from '86. Set in Sherlock Holmes school days setting the story background as he becomes the worlds most famous detective. I remember seeing this at the cinema and it is just the sort of film full of action and adventure everyone should love. Steven Spielberg was involved in the production and it shows. This film has a feel to it like the Mummy and Indiana Jones films. It also has some very good SFX for the time, including very early use of cgi. If you have missed this film then you are missing out, track it down!

I might have loved this more if I didn't love Sherlock Holmes. But, I do. The plot seemed hopelessly contrived and the acting--with the notable exception of Watson--wooden. The sets were good, though, as were the costumes.

Described as "fan-fiction" by my Sherlock Holmes book fan brother, and by me as "a good kids movie". Yes, the film makes it perfectly clear, twice, that this story is not part of any of the books about Holmes, or anything written by Sir Arthur Conan Doyle at all. But that doesn't make it a horrible movie. It has some good action scenes, and it's structured as a normal kids mystery movie with both foreseen and unforeseen twists at the end. I'm not saying it was a good movie either, though. It has its share of boring talky scenes, but at least they made me laugh sometimes. Overall, it's an okay movie, not too bad, but not good either.