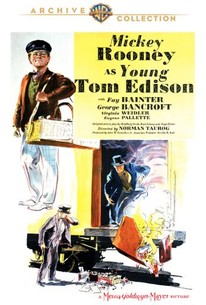 This account of Thomas Alva Edison's boyhood depict him as a brilliant but rambunctious teenager (Mickey Rooney), often distracted by his own ideas and frequently carried toward disaster by his fascination with his experiments, much to the consternation of his parents, neighbors, and teachers. While most of the town of Port Huron, Michigan -- including his own father (George Bancroft) -- doubt the boy's competency, his younger sister (Virginia Weidler) and, most of all, his mother (Fay Bainter) believe in him and help sustain him until the climactic moment where his abilities and knowledge help avert a tragedy. Most of the major incidents depicted in the movie are true, and verified by the historical record -- or were believed to be true (based on Edison's own accounts) at the time of the movie's production -- though the time-line has been altered (and compressed) for dramatic purposes, in what is generally an entertaining and surprisingly informative bio-pic.

There are no critic reviews yet for Young Tom Edison. Keep checking Rotten Tomatoes for updates!

There are no featured audience reviews yet. Click the link below to see what others say about Young Tom Edison!