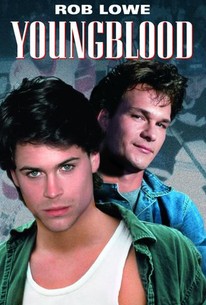 The fast-paced, and sometimes brutal world of ice hockey provides the setting for this exciting, adolescent-oriented chronicle of a naive, and almost too pacifistic, farm boy's determination to become a champion on the ice. Complicating matters is his love for the coach's lovely daughter.

David B. Sharp
as Hamilton Mustang

Youngblood runs out of gas halfway through the first period.

Youngblood is not a bad movie, and indeed has moments of real conviction. But it is doomed by its plot, which is yet another example of what I like to call the Climb from Despair to Victory (CLIDVIC, rhymes with Kid Pic).

...ice hockey lends itself perfectly to the big screen, and it helps that many of the main cast know their way around the Plexiglas arenas....

Is no masterpiece, but it's a definite slice of eighties cheese that delivers on action, engaging characters, and a kick ass final showdown that I had fun with.

So gay that it's almost possible to see the film as a comment that the real audience for movies like this are pre-sexual little boys and homosexual big boys.

Its advocacy of violence as the only way to victory is nothing to cheer about.

I saw this sports romance movie on TV about a month ago, and I thought it was pretty good, especially with the two hot stars Lowe and Swayze, but it could've been better, less predictable, I mean.

It's really 80s oriented and completely ridiculous half of the time, but there's a really good story within it as well. Rob Lowe parades around as the ultimate beefcake and Brat Pack star at the time, learning from the wise ways of Patrick Swayze. I think it's accessible to people that like sports movies and also people that don't like them because it's just as much a coming of age and love story.

Youngblood is a by-the-numbers sports story, of the "underdog youth makes good" variety. Within this framework, the actual sports change from film to film, and sometimes the stories are about a team rather than one individual, but the basic curve of excitement never changes. The newcomer needs to excel because sports are his ticket out of a life of drudgery. The budding star has talent, but is missing some key ingredient which holds him back. After a few initial successes, he is thwarted by an evil entity. Sometimes the obstacle is a player on another team, other times an injury, sometimes the problem lies within himself. In the course of the film the youngster overcomes the problem, defeats the nemesis, gets the girl, and wins the big game in time for the credits to roll over the applause. In this case, Youngblood is a young American hockey player who sees the sport he loves as his only way out of a lifetime of farming or mill work. His older brother had the same dream, but an injury permanently took him out of the sport, and now the younger brother has been given a chance. He must overcome two obstacles: a thug on the other championship contender, and his own dislike of fighting. To make his challenge even tougher, he meets a girl (Cynthia Gibb) right after joining his first professional team, and she turns out to be the coach's only daughter, which doesn't please the coach. Well, we all know the formula, so the rest of the film is predictable, but I really enjoyed this film. I basically like this formula to begin with, and it helps when the film is about a sport you kinda enjoy and/or know something about. In the end, however, it is not the familiar story, but the unique execution that makes this kind of picture succeed or fail. In this case, the characters are all likeable, the hockey action is believable, and the film even managed a couple of serious themes. Best of all, the film is liberally sprinkled with humor. An easy watch.

This movie is a great movie about hockey,and Rob Lowe was adorable in this,and so was Patrick Swayze