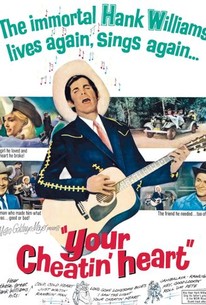 Perhaps the most popular and influential songwriter in the history of country music, Hank Williams Sr. didn't have a long recording career (only four years), but after passing away on New Year's Day, 1953, at the age of 29, he became a legend of American music practically overnight, and this biopic puts a veneer of Hollywood gloss on the story of his rise to fame. Hank Williams (played by Donald Losby as a young man) is a boy growing up poor in a small Alabama town who learns how to play guitar from itinerant musician and shoeshine man Teetot (Rex Ingram), who looks out for the boy. After Teetot's untimely death, young Hank sets his sights on a career in music; years later, Williams (played as an adult by George Hamilton) is performing as part of a traveling medicine show when he meets Audrey (Susan Oliver), who recognizes the full extent of Hank's talent. At Audrey's urgings, Williams joins forces with manager Shorty Younger (Red Buttons) and music publisher Fred Rose (Arthur O'Connell), and with their help Hank becomes a rising star in country music, developing a loyal following through hit records, heavy touring, and appearances on the Grand Ole Opry. However, Williams doesn't cope well with the pressures of fame, and despite the help of his friends and the guidance of his wife, he begins missing shows, developing a reputation as an unreliable performer, and drinking heavily. Produced by legendary B-movie magnate Sam Katzman, Your Cheatin' Heart featured 15-year-old Hank Williams Jr. re-creating his father's vocals for the film's soundtrack.

Hortense Petra
as Wilma the Cashier

Critic Reviews for Your Cheatin' Heart

The film is best in presenting the lively country music.

There are no featured reviews for Your Cheatin' Heart at this time.