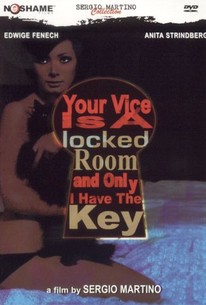 A novelist suffering from a bad case of writer's block finds his troubles compounded when the violent murder of his mistress sparks a bloody crime spree in this giallo from The Case of the Scorpion's Tail director Sergio Martino. Oliver (Luigi Pistilli) is an embittered, booze-swilling writer trapped in a loveless, sadomasochistic marriage with his equally venomous wife Irina (Anita Strindberg). Desperate for some physical affection and repulsed by his unaccommodating wife, Oliver schedules an illicit rendezvous with a beautiful young woman who works at a local book store. When Oliver fails to show for their extramarital encounter and later learns that his lover has been slashed to death, a subsequent series of brutal slayings leads him to believe that someone very close to him is harboring a deadly secret.

Giallo is often about keeping characters (and audiences) off balance. Your Vice... does so with effortless glee, embracing the frazzled and warped headspace of people who believe they are immune to fate's spiteful sense of comeuppance.

Martino expertly manages the many twists, in a story where it is always important to know just who is in bed with whom, who is on top, and who is being taken for a ride.

Although the dialogue is often clumsy and the story quite silly in places, this is a film that will delight genre fans.

A story soaked in corruption, violence and twisted sexuality.

Indulgent title it may have, but everything else about this fine, tight, tense movie is the very opposite of indulgence.

I only rented this because of the amazing title, but this is a really serious giallo classic. Sexy, immersive turns by Edwige Fenech and Anita Strindberg liven this wily portmanteau of Poe and Italian bacchanalia; the character work is surprisingly complex, and the cinematography pops. It's been a while since I've seen it since I could never find it on Flixster, but I can think of image after warped image that have lingered in my brain. Sergio Martino is absolutely one of the strongest directors in this field, and I look forward to seeing more of his work. Torso's next!

It's just a whole mess of plot holes, but all of them are nicely lit and the camera guides the viewer around each one until ... did I see an anthology movie where only one story ended?

Beautiful blacks and rich reds create a beautiful photographic look in this classic Giallo by Sergio Martino. The story leaves a little to be desired, but that is typical for this genre. The style and camera movement more than make up for it's story pitfalls.