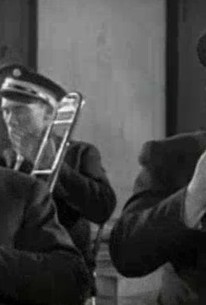 This classic Laurel and Hardy comedy is famous for the pants-ripping scene at the end, but the other parts of it are just as funny. Laurel plays the clarinet, and Hardy plays the French horn in a band. During a concert, they destroy a musical performance and drive the conductor crazy. Fired from their job, they return to their boarding house for dinner where the landlady reminds them, "In the excitement of having a job, you have overlooked 14 weeks board bill," and she evicts them when she discovers that they are no longer employed. They have little success working as street musicians, and in frustration, they break each other's instruments, kick each other, and rip off each other's clothing. This grows into a huge street battle where many men are kicking each other and ripping each other's pants. The final pants-ripping scene is not funny just because so many men lose their pants, but because Laurel and Hardy come up with inventive ways to pull more innocent bystanders into the fray.

Sam Lufkin
as Man in restaurant

Agnes Steele
as Landlady
View All

Critic Reviews for You're Darn Tootin'

There are no critic reviews yet for You're Darn Tootin'. Keep checking Rotten Tomatoes for updates!

Audience Reviews for You're Darn Tootin'

I'm just never going to be a Laurel & Hardy fan. In this short, their characters are far too impossibly stupid to be enjoyable. So Stan plays clarinet, but doesn't even know how to assemble the instrument? Sure, that's plausible. And these two are broke, yet treat their instruments -- their only feasible means of support -- like garbage? And then the film merely ends with a lame mess of slapstick punches. Ho hum. Look up the 1935 Disney cartoon, "The Band Concert." Miles more funny and clever.