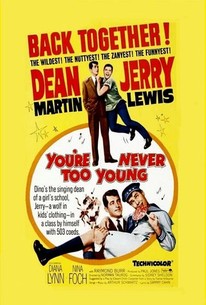 You're Never Too Young Photos

You're Never Too Young is a slapstick-with-songs remake of the 1944 Ray Milland/Ginger Rogers vehicle The Major and the Minor. Dean Martin plays the Milland part, while Ginger's shoes are filled by...Jerry Lewis? Lewis plays an apprentice barber who inadvertently crosses a homicidal jewel thief (Raymond Burr), and equally inadvertently hightails it out of town with the crook's jewels in his possession. Desperate to escape the crook's clutches, and lacking the necessary funds for a train ticket, Lewis disguises himself as a 12-year-old boy so he can travel half fare. He latches onto Dean, a music teacher heading for an all-girls school. After innumerable routines sparked by Lewis's adolescent disguise, the jewel thief catches up with him, leading to a rollicking climactic speedboat chase. Dean Martin has plenty of opportunities to serenade leading lady Diana Lynn (who'd played a supporting role in The Major and the Minor), while Jerry Lewis is in peak form doing his usual "waah-waah-waah" schtick. The original Billy Wilder/Charles Brackett script for The Major and the Minor was reshaped into You're Never Too Young by future bestselling novelist Sidney Sheldon.

Critic Reviews for You're Never Too Young

You know me, I'm not a Martin & Lewis fan. But I liked this one better than most of their circuses, and I'll bet their "regulars" will find it real real crazy.

Audience Reviews for You're Never Too Young

There are no featured audience reviews yet. Click the link below to see what others say about You're Never Too Young!

You're Never Too Young Quotes