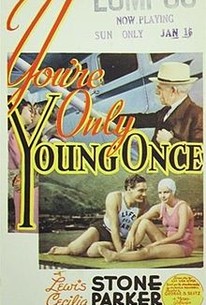 You're Only Young Once Photos

The sequel to the first Andy Hardy picture, A Family Affair, this light comedy stars Mickey Rooney in the role that would bring him his greatest fame. Judge Hardy's role is no longer played by Lionel Barrymore, as in the original, but by Lewis Stone. Fay Holden is his loyal wife, and Cecilia Parker portrays the daughter, Marian. The judge decides to take his family on a vacation to Catalina Island, off the coast of California. He muffs several opportunities to land a big fish. Andy tries to land a local girl, Jerry Lane (Eleanor Lynn), with as much success as his father. Marian keeps flirting with a hunky lifeguard, but he turns out to be married. The Hardy family saga would continue for 14 more features over 20 years. ~ Michael Betzold, Rovi

Oscar O'Shea
as Sheriff
View All

Critic Reviews for You're Only Young Once

...sends the family on a California vacation (and into the predatory dating scene of West Coast decadence)...

There are no featured reviews for You're Only Young Once at this time.

You're Only Young Once Quotes