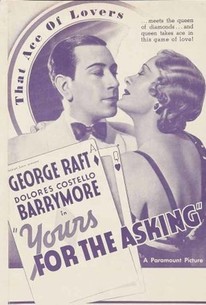 Yours for the Asking Photos

In this crime comedy, a street-savvy gangster involves himself with a Miami socialite. Together, they conspire to turn her familial mansion into a secret gambling casino. The hood is convinced her beauty will draw customers and with the ensuing profits, the two will be able to pay their debts. Unbeknownst to him, his own gang members, fearing that he will abandon his "roots" in favor of the high-life, are conspiring to break up his partnership with the girl. They hire two grifters to impersonate a British colonel and his niece; they then try to convince the hood that he and the high-society dame are a bad match. When the gangster meets the "niece," he falls head-over-heels in love and forgets all about the socialite. When she, who is really after his money, returns his affections, the gang suddenly realizes that their scheme has backfired. Fortunately, by the story's end, the hood figures it all out and returns to the loyal socialite whose love remained undaunted.

Thomas A. Curran
as Man

Betty Blythe
as May

Groucho Marx
as Sunbathers on Beach

Charlie Ruggles
as Sunbathers on Beach
View All

Critic Reviews for Yours for the Asking

The two principals in Yours For the Asking worry along with their sad parts as well as they can, leaving the task of entertainment to the three comics and to [Ida] Lupino.

There are no featured reviews for Yours for the Asking at this time.

Yours for the Asking Quotes