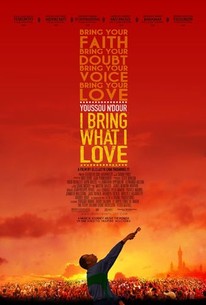 Critics Consensus: It never gets close enough to its subject, and it's curiously light on music, but this documentary is nonetheless a long-overdue tribute to a brilliant musician.

Critics Consensus: It never gets close enough to its subject, and it's curiously light on music, but this documentary is nonetheless a long-overdue tribute to a brilliant musician.

Critic Consensus: It never gets close enough to its subject, and it's curiously light on music, but this documentary is nonetheless a long-overdue tribute to a brilliant musician.

Youssou Ndour: I Bring What I Love Photos

As one of two major documentaries on hotly debated Senegalese world musician Youssou N'Dour to emerge within a year of one another (see also Youssou N'Dour: Return to GorÃ (C)e), this particular chronicle was produced and shot over a period of several years. Helmed by director Elizabeth Chai Vasarhelyi, it witnesses the evolution and production of N'Dour's June 2004 album Egypt, on the Nonesuch label -- the recording that details N'Dour fully expressing his newfound Muslim faith. A veritable bedrock of controversy, the album courted objections from multiple countries: Americans objected because of their post-9/11 tendencies to attribute Islam to violent extremism; Senegalese DJs and radio-station proprietors objected given the odd discomfiture associated with playing religious music about Allah alongside often-racy selections by other acts. Even more significantly, N'Dour inadvertently carried this controversy a step further by performing live during the Muslim holy month of Ramadan -- thus infuriating Senegalese religious conservatives. The film witnesses N'Dour confronting these challenges head-on and, incredibly, surmounting them with great ease and finesse. ~ Nathan Southern, Rovi

News & Interviews for Youssou Ndour: I Bring What I Love

View All Youssou Ndour: I Bring What I Love News

Critic Reviews for Youssou Ndour: I Bring What I Love

By far the most powerful element is N'Dour's lone voice, a thing of high, pure beauty that feels at once ancient and new. When he sings, an otherwise earnestly conventional film becomes a vehicle of incantatory power.

This documentary by Elizabeth Chai Vasarhelyi could have used more music for my taste, and fewer talking heads. But it's absorbing all the same. N'Dour is the sort of humanitarian bridge that we need in a world so sharply divided.

Be sure to stay through the closing credits as the scenes of Senegalese life act as a captivating coda to a film pulsing with music and memory.

Youssou N'Dour is a beautiful film to watch as it unfolds the life of N'Dour and, by extension, the lives of millions of West Africans who are anonymous to many in the West.

N'Dour is the film's unstoppable force, handsome and radiating joy. He's the kind of performer who is larger than life but always seems like one of the family.

Although his movie often resembles the kind of promotional video one might find as an extra on a concert DVD, N'Dour in full throttle is a sight, and sound, to behold.

When the music starts playing, it's easy to forgive the film's flaws.

An inspiring and edifying cinematic exploration of the power of music and the soul of a big-hearted African Sufi singer who has used his exceptional talent and creativity to make a better world.

While the rambling, repetitive look at his life off stage is unevenly edited, his music is gloriously heard and seamlessly presented to an appreciative global audience.

Documentary about a great world-music performer is colorful but also suffers from a certain blandness and repetitiveness. A pure concert movie with biographical interruptions would have been preferable.

A lively, soulful documentary that lacks sufficient insight into the life of Youssou N'Dour.

Audience Reviews for Youssou Ndour: I Bring What I Love

There are no featured audience reviews yet. Click the link below to see what others say about Youssou Ndour: I Bring What I Love!

Youssou Ndour: I Bring What I Love Quotes