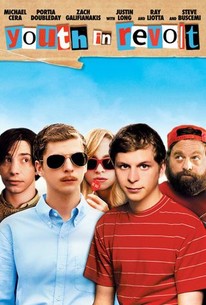 Critics Consensus: It may not entirely do its source material justice, but Miguel Arteta's Youth in Revolt is a fun, funny comic romp that lets Michael Cera stretch a little and introduces filmgoers to a major find in Portia Doubleday.

Critics Consensus: It may not entirely do its source material justice, but Miguel Arteta's Youth in Revolt is a fun, funny comic romp that lets Michael Cera stretch a little and introduces filmgoers to a major find in Portia Doubleday.

Critic Consensus: It may not entirely do its source material justice, but Miguel Arteta's Youth in Revolt is a fun, funny comic romp that lets Michael Cera stretch a little and introduces filmgoers to a major find in Portia Doubleday.

Superbad's Michael Cera discovers a vacation romance in Youth in Revolt, a teen comedy from Charlie Bartlett's screenwriter, Gustin Nash, and director Miguel Arteta (Chuck & Buck). The film is an adaptation of C.D. Payne's first book in a series of best-selling satirical novels starring Nick Twisp, a sexually charged 14-year-old whose intelligence and hormones get him into all sorts of adventures. ~ Jeremy Wheeler, Rovi

Oscar the Dog
as Albert

Bruce Lawson
as Officer A. Fanning

Christa B. Allen
as Teenage Girl

News & Interviews for Youth in Revolt

View All Youth in Revolt News

Critic Reviews for Youth in Revolt

But all the silliness reminds us that there is no age limit on expressing your confident inner vixen - especially in these uneasy times.

The movie doesn't pack the same punch as the book, but still manages to create a wildly entertaining blend of teen love, awkwardness and vulgarity.

[Its] classic cinema shoutouts and gaggle of off-kilter characters feel like retreads.

It's chaotic and episodic, but this is Cera's star turn. Superbad meets Fight Club? That'll do it.

The tone throughout is moderately quirky rather than full-on teen-flick vulgarian, bolstered by indie-cred cameos.

In a wickedly witty dual role in the funniest teen flick in a long time, Cera finally seems to loosen up and have some fun.

As if written specifically for Cera, the dialogue and screenplay are particularly seductive, enticing with bitingly sarcastic poetry and linguistically adept observations.

All in all, Youth in Revolt is quite simply an unremarkable film.

A funny, if hardly revolutionary, new entry in the teen sex comedy genre.

Miguel Arteta furnishes the film with fantasy sequences - such as one involving stop-motion miniature models - that are more contrived than inspired.

An uneven story and crass comedy could leave viewers revolted.

Audience Reviews for Youth in Revolt

Milquetoast Michael Cera as a pencil-mustache-sportin' evil alter ego is entertaining enough, but the rest of the boy-ruins-his-life-for-a-girl story is pretty banal and quite tame surprisingly. Portia Doubleday as Sheeni isn't much of a siren either, but Rooney Mara looks satisfyingly hot and mean. The part with Adhir Kalyan from "Rules of Engagement" in his skivvies is funny.

A cracking indy coming of age movie with the ever so funny Michael Cera. Really did not no what i was going to get here but it turns out to been a very funny and surreal comedy.Its when Cera French auter ego takes over that Cera really shines. All surrporting cast are so good with justin long adding a little fun too. This is a pleasant surprise and worth checking out.There are many laughs to have here.

A dark satirical comedy. it took me a little bit to warm up to it but once I did I really enjoyed it.