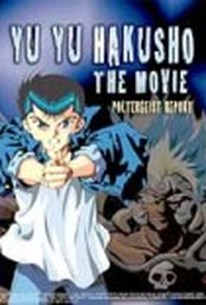 Many millennia ago, a war was fought between the Netherworld and the Spirit world, eventually destroying the Netherworld and vanquishing its king, sending him to the end of space. Now Yusuke, the high-school delinquent whose life was restored so that he might defend humanity against evil, must once again use his paranormal powers of combat as demons from the Netherworld prepare for a second assault on our world, one that could end with the king of the Netherworld turning the Earth into his own black pit of nothingness. This movie takes place after the events of the Yu Yu Hakusho TV show. ~ Cammila Collar, Rovi

There are no critic reviews yet for Yu Yu Hakusho: The Movie - Poltergeist Report. Keep checking Rotten Tomatoes for updates!

There are no featured audience reviews yet. Click the link below to see what others say about Yu Yu Hakusho: The Movie - Poltergeist Report!