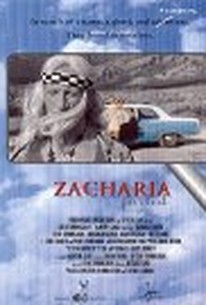 Michael Rohl made his directorial debut with this Canadian comedy-drama in which Brian (Benjamin Ratner) loses his San Francisco garage job and talks pal Michael (Colin Cunningham) into joining him on a fishing trip. At an unmarked gravesite, they find a key inscribed "PUMZACH." This prompts them to cross the border into Nevada in search of a shaman who can translate the enigmatic inscription. After meeting medicine-man Martin Yellowcrow (Willie John Hanna), owner of flatulent canine Zacharia, they are joined by winsome waitress Corey (Madison Graie) and nerdy numismatist Wayne Newton (C. Ernst Harth). The group arrives in a small town where the locksmith finds a match for the key with lonely Jean (Betty Linde), mother of a missing son. Minus Wayne, they head back to California. Shot in Vancouver, this film was shown at the 1998 Vancouver Film Festival and the 1998 AFI Festival. ~ Bhob Stewart, Rovi

There are no critic reviews yet for Zacharia Farted. Keep checking Rotten Tomatoes for updates!

There are no featured reviews for Zacharia Farted at this time.