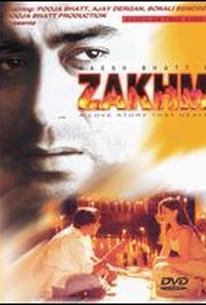 Zakhm is set against the most painful of the city's experiences, the 1993 communal riots. It is about an unnamed Muslim woman (Pooja Bhatt) who has had two children by a film-maker (Nagarjuna). She keeps hoping her man will marry her, but he ties the knot with another because his mother would never tolerate a union with a Muslim.The unwed mother has a very strong bond with her elder son Ajay (Ajay Devgan), the only one with whom she shares her humiliation of being an unmarried mother and a closet Muslim. His younger brother (Akshay Anand) is kept in the dark about it though. Later, the younger boy joins a Hindu political group and the mother is burnt alive by a Muslim mob.The dying woman has one last wish, that she be buried according to Muslim rites since that is the only way she can attain heaven. The elder son strives to fulfil the wish while the younger brother, with help from an ambitious leader of the group, tries to get her cremated the Hindu way.

Mahesh Bhatt's film presaged the rise and rise of Hindu fundamentalism ; in one of his best films, backed by a star turn from leading man Ajay Devgn.

There are no featured audience reviews yet. Click the link below to see what others say about Zakhm (Wound)!