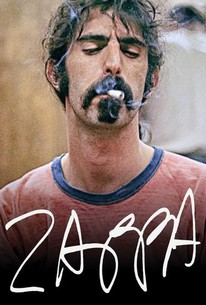 Critics Consensus: As rich and complex as its subject's best work, Zappa honors the life and career of a musical legend without falling into hagiography.

Critics Consensus: As rich and complex as its subject's best work, Zappa honors the life and career of a musical legend without falling into hagiography.

Critic Consensus: As rich and complex as its subject's best work, Zappa honors the life and career of a musical legend without falling into hagiography.

Zappa is a film that revolves around the life, music, and artistry of Frank Vincent Zappa, one of the most admired and celebrated musicians in American history. With archival footage of Zappa himself and interviews with people closest to him, such as his late widow Gail Zappa; Mothers of Invention bandmate Ian Underwood; and other notable musicians such as Steve Vai, David Harrington, and Scott Thunes, the film gives its audience an intimate look at the man behind the many instruments. Written and directed by Alex Winter.

It makes a very good case that you should be interested in Zappa's work.

If there is one American musician who was overdue for a comprehensive documentary, that's Zappa -- and this one doesn't disappoint. It's as messy as his music in parts, but that fits.

Key to the success of the film is the editing, a pinballing assault of free association, claymation and gleeful profanity, which goes some way towards recreating what it must have been like to spend time inside Zappa's head.

Winter has simply collated the resulting audio and video recordings into more than two hours of slightly sophomoric Zap-tastic musings on the pointlessness of commercial music, the need to fight the system and the tediousness of mainstream success.

Winter has created a fascinating watch.

Winter's film deserves a lot of credit for appreciating the full, intrepid range of Zappa's music, though penetrating the leathery mystery of his personality is perhaps a tall order.

While perhaps erring on the side of worshipful, and not interesting in delving into Zappa's flaws, it is, nonetheless, gripping and thorough.

"Legendary" is an adjective that gets thrown around a lot, often without too much justification. So too is "visionary", come to think of it. But Frank Zappa was both: insanely talented, intimidatingly intelligent and incorrigibly iconoclastic.

Winter never seeks to solve or understand Zappa's singular mercurial character, and instead seeks to convey and celebrate the artist's mystical aura and puzzling persona.

It's exciting, wonderfully disorienting and, at times quite funny...

Mostly, Zappa is a terrific couple of hours, well-spent.

A full account of how Zappa ran his own race throughout a dizzying, intermittently brilliant career that flitted across the mainstream and alternative music scenes is lovingly dispatched in Alex Winter's excellent, absorbing, long-belated profile.

There are no featured reviews for Zappa at this time.