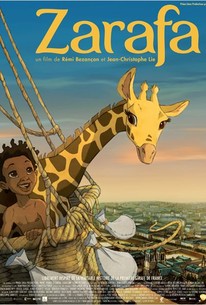 Under a baobab tree, an old man tells a story to the children around him: The story of the everlasting friendship between Maki, a little boy aged 10, and Zarafa, an orphaned giraffe, a gift from the Pasha of Egypt to the King of France, Charles X. Hassan, Prince of the Desert, is instructed by the Pasha to deliver Zarafa to France. But Maki has made up his mind to do everything in his power to stop Hassan from fulfilling his mission and to bring the giraffe back to its native land - even if it means risking his own life - because he must fulfill his promise to Zarafa's late mother. During an epic journey that takes them from Sudan to Paris, passing on the way through Alexandria, Marseille and the snow-capped Alps, they have many adventures, crossing paths with the aviator Malaterre, a pair of unusual twin cows called Mounh and Sounh, and the pirate queen Bouboulina.

Zarafa is a gorgeously delicate hand-drawn animation about the first giraffe to make the perilous journey from Africa to 19th-century Paris.

The Kirikou movies were livelier.

In trying to tell an epic tale over just 78 minutes, the filmmakers sacrifice anything that might have made their film memorable.

The film veers from quasi-real to cartoonily silly and scenes either drag or whirl by too fast.

Zarafa fails to supply an emotional punch to match the grandeur of its Lawrence of Arabia-inspired compositions.

This hand-drawn French adventure is a children's story in the routine template of many friends-and-villains quests, but with a fresh historical setting and a serenely subdued look.

When it does work, it absolutely sings, but at the same time is without question an uneven experience.

Its story is entertaining and the multiple messages it espouses are all valid and important ones, but like trying to pack a giraffe into a Mini Cooper, it might not be the best idea and is a lacks a certain grace in places.

While the subtitles and material might skew this French-language animation towards older children, it is a beautifully rendered piece, with a heart is as big as the Sahara.

A lot of ground -- both literal and thematic -- is here covered in 78 wonderfully animated minutes.

Gently told, but with wild flights of imagination involving hot-air balloons, nomads and spectacular scenery, it's a charming adventure, undercut with wise observations about big themes ...

Although the animated characters have a detailed, Disney-friendly feel, there is little of the sentimentality that tends to fur the teeth of US animation.

There are no featured audience reviews yet. Click the link below to see what others say about Zarafa!