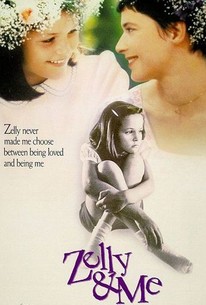 Zelly and Me Photos

In this drama, young Phoebe (Alexandra Johnes) is sent to live with her wealthy grandmother (Glynis Johns) after both of her parents are tragically killed. As Phoebe attempts to accustom herself to her new life with her stern grandmother, she becomes very attached to her governess, Zelly (Isabella Rossellini). However, when her jealous grandmother discovers that her granddaughter has grown closer to the hired help than with her own flesh and blood, she fires all of the employees, much to Phoebe's dismay.

Dr. Sharon Morris May
as Child on School Bus

Curtis Worth
as Child on School Bus

Amy Young
as Child on School Bus
View All

Critic Reviews for Zelly and Me

Small and intimate movie about the resiliency of a little girl in the face of adversity, pain and change.

There are no featured reviews for Zelly and Me at this time.

Zelly and Me Quotes