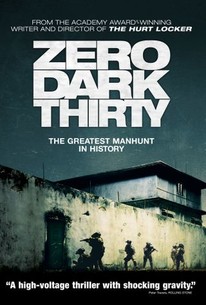 For a decade, an elite team of intelligence and military operatives, working in secret across the globe, devoted themselves to a single goal: to find and eliminate Osama bin Laden. Zero Dark Thirty reunites the Oscar winning team of director-producer Kathryn Bigelow and writer-producer Mark Boal (The Hurt Locker) for the story of history's greatest manhunt for the world's most dangerous man. -- (C) Official Site

Wahab Sheikh
as Detainee on Monitor

Alexander Karim
as Detainee on Monitor

Nabil Elouahabi
as Detainee on Monitor

Aymen Hamdouchi
as Detainee on Monitor

Simon Abkarian
as Detainee on Monitor

Ali Marhyar
as Interrogator on Monitor

Parker Sawyers
as Interrogator on Monitor

Akin Gazi
as Interrogator on Monitor

Derek Siow
as Interrogator on Monitor

Fredric Lehne
as The Wolf

Antony Edridge
as General in Hangar

[Zero Dark Thirty] is one of the great cinematic procedurals ever made.

When it comes to establishing and maintaining tension, there wasn't a better American genre picture released this year. Refrain from viewing it as historical record and you won't leave disappointed.

... it is Chastain's performance, as restrained as it is powerful, that may just be the cherry atop this massive and meticulous film.

This doesn't zip along in the manner of typical Hollywood entertainment but it's memorable cinema with a finale that will stay with you long after viewing.

A great American film: complicated, nuanced, searching, piercing, difficult - and yet thrilling and satisfying all the same.

Zero Dark Thirty is a magnificent movie, if we ignore the moral ambiguities. But can we?

Kathryn Bigelow's tense thriller is worth seeing again just to be reminded how brilliant Chastain is in this role of single-minded operative.

What stands out most (in addition to Jessica Chastain's brilliant performance) is the portrait of the normally mildly maligned (also often portrayed as supremely sneaky and up to no good) CIA-as a bastion of patriotism.

With its course of realism over romanticism, "Zero Dark Thirty" offers no slice-of-life, next-door-neighbor stories of Americana.

As was the case with The Hurt Locker (2008), where the central figures were US soldiers in Iraq, Bigelow concentrates in her latest work on how exhausting and difficult it is to be a victimizer.

A superbly edge-of-your-seat experience, perfectly riddled with unshielded and realistic violence and an enthralling hunt for evidence.

Kathryn Bigelow's expansive drama follows the decade-long international manhunt for Osama bin Laden, from the events of 9/11 to his eventual death at the hands of US Marines.

Seems like one of the most anticipated and best movie of 2012 is one of the movies that i didnt enjoy! For me although there was alot going on, action and fantastic acting there just didnt seem to moving and i felt bored throughout the movie. Majorly disappointed may watch again with lower expectations!

Some of the dialogue may be a bit repetitious, but Bigelow's direction is very effective and she knows how to maintain a constant level of nerve-racking tension in this descriptive (and essentially objective) account of a historical operation whose end is already known.

What defines this film is its controversial depiction of torture,but what it unearths is much more harrowing and heroic than terrifying. The story revolves around CIA agent Maya, who aims to finish a decades long manhunt for Osama bin Laden while stationed in Pakistan, starting in 2003. Critics are inarguably split on whether they believe the torture depicted in this film is shown as essential in the capture of wanted terrorists, or an accurate portrayal of torture tactics in all their inhumane glory. The characters in the film certainly feel that torturing detainees helps in the process, but it's left vague whether the filmmaker supports this tactic. The story is entertaining on its own merit, helped by the ferocious performance of Chastain, and the unraveling of the mystery right before our eyes. The intricacy of bin Laden's extraction at the hands of the Navy SEAL team was especially interesting to watch, and was supposedly very truthful in its depiction. There's an emotional component for anyone imbibed in post-9/11 dialogue, but there's also entertainment in the planning and investigation behind the scenes.

Not my favorite subject matter, but watched it anyway because of the reviews. I thought that it was strong in terms of acting but I just couldn't buy the fact that they went after bin Laden on a hunch by one single CIA agent. But of course, they had to do it this way because if not then it would've been a documentary I suppose. I think the story to be told is intriguing and relevant but the filmmakers just didn't satisfy me with this adaptation.