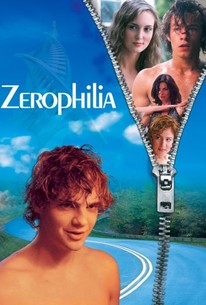 Critics Consensus: Zerophilia has some intriguing ideas, but they're imparted with a frustrating lack of wit, daring, or valuable insight.

Critics Consensus: Zerophilia has some intriguing ideas, but they're imparted with a frustrating lack of wit, daring, or valuable insight.

Critic Consensus: Zerophilia has some intriguing ideas, but they're imparted with a frustrating lack of wit, daring, or valuable insight.

A young man who remains decidedly insecure about his masculinity attempts to uncover the mystery of his rare genetic disorder before it transforms him into a female in a sci fi flavored romantic comedy directed by Martin Curland and inspired by the studies of renowned Neuromorphologists Professor Czierny Ptolemy and Eva Szantova. Slowly immersed in a world where some change gender at will and others seem to make the transformation despite how hard they try not to, Luke (Taylor Handley) is forced to abandon all of his assumptions on sexual identity to focus on the one person he truly loves.

Amid deliberately campy situations and sophomoric jokes, Zerophilia offers a disarmingly sweet lesson about learning to identify with the opposite gender.

The script's lazy convenience is embodied by a beautiful neuromorphologist (Gina Bellman) who arrives on the scene to explain everything that's going on.

Boasts a fertile premise but a sterile outcome.

As adroitly executed a directorial debut as you could ever hope to find, this ingenious, sci-fi comedy revolves around a mythological malady which causes carriers to change gender whenever they make love.

Anyone who understands the meaning of the title or catches all the frog references scattered through writer-director Martin Curland's feature debut will have a head start understanding this confused and confusing comedy.

Even if you'd enjoy spending a day as the opposite sex, you're better off abstaining from Zerophilia and daydreaming about what you'd do with your time.

Sexual confusion made manifest in a romantic comedy gender-bender first try by newcomer Martin Curland and a host of young faces and bodies.

With clunky dialogue, jokes that fall flat and an uneven sense of rhythm and timing, the movie looks and feels too amateurish to take on this kind of material.

I'm not aware of any other movie like this one. Unique concept of shape shifting and gender identity that was quite goofy at times, but also kept surprising me.

This was better than I expected. Hardly great, but I enjoyed it a lot. I can't say I've seen a movie that deals with changing genders in quite this way before. It's not a gay film, it's mostly hetero sex, but one that explores sexuality in a slightly different way. Basically, love whomever you choose according to who you are. Expect simplistic writing, and plotting (after school special with nudity), and enjoy the intent. Side note: Kudos to whoever was in charge of casting, There are some really great looking actors in this film. :)

[font=Century Gothic]"Zerophilia" starts with Luke(Taylor Handley) losing his virginity to an older woman(Kelly LeBrock) on a camping trip. As possible compensation for his manhood possibly shrinking afterwards, he buys an 18-wheeler and brings it to Max(Kyle Schmid) to have it repaired. While there, he makes the acquaintance of Max's sister, Michelle(Rebecca Mozo), who he asks to dinner. But that only exacerbates his problems...[/font] [font=Century Gothic][/font] [font=Century Gothic]"Zerophilia" is a slightly engaging genderblender that wastes an original premise on arbritrary rules and the usual male posturing, leaving little room for anything worthwhile about masculinity or gender.(Personally, I think it would be cool to change genders at will.) None of the performances amounts to much of anything except for Gina Bellman's spirited performance. [/font]