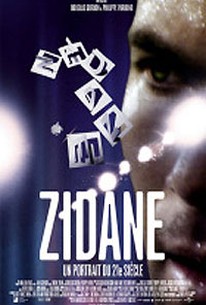 Acclaimed visual artists Douglas Gordon and Phillipe Parreno turn their attentions to filmmaking -- and one of Europe's leading soccer stars -- in this offbeat documentary. Zinedine Zidane is among the most celebrated athletes in European football; playing for Real Madrid, the Frenchman has earned a reputation for graceful yet aggressive play and a confrontational style. Gordon and Parreno have made a film about Zidane, but viewers of Zidane: A 21st Century Portrait will learn nothing about his life off the field, and only so much about his work on it. Instead of telling Zidane's life story, the filmmakers set up 17 cameras around the field (with the help of cinematographer Darius Khondji) for a April 23, 2005, game against Villarreal and carefully followed Zidane throughout the game, even when he wasn't in play. The subsequent footage was used to create a portrait in motion of the athlete, much in the manner of a painter or photographer, accompanied by excerpts from recorded interviews in which the footballer discusses his attitude toward the game and his feelings on the field. Zidane: A 21st Century Portrait (aka Zidane: Un Portrait du XXIe Siecle) was screened at the 2006 Toronto Film Festival as part of the Visions series, devoted to maverick filmmaking from around the world.

You learn little by way of hard facts about the adored French soccer star and famous head-butter Zinedine Zidane in the formalist exercise that bears his name.

He's set apart not only as the piece's sole subject but because he's hyper-alert, continually responding to invisible forces, raptly focused on events beyond the frame.

Zidane's charisma accumulates and the film becomes a hypnotic experience to which you must simply abandon yourself.

As far as these filmmakers are concerned, Zidane, especially in the moments of tedium, is the modern day 'Outsider' in the true Camusian sense. As such this movie is more an analysis of the immigrant experience than of a footballer.

If you believe soccer is indeed the beautiful game, then you're destined to fall hopelessly in love with what you see here.

For all the fuss that's sometimes been made of the film's semi-experimental approach, it is first and foremost a sensory experience that puts the viewer right on the field.

In moments of stillness, a composition of fast jukes and stutter-steps delight the eye. It's a lot of hurry-up and wait at first, but well worth it come the film's finish.

Watching a single athlete for the duration of a game is an interesting concept, but Zidane is better in theory than in execution.

There's more filler than real action (much like any soccer match, in my opinion) and the film is a challenge to get all the way through for anyone without an interest in the game or Zidane himself.

Oh my god, I hate this movie so much. It fails on every possible level. It's not an engaging portrait of a soccer player. It's not the chronicle of a fascinating sport. It's not even good cover of a soccer game. This is footage of a guy running around or, when he's not, shouting or, when he's not, milling around. From 17 angles, no less. Why this is called a "21st century portrait", I'll never know. If it's meant to show us the real Zidane, why make a point of silencing his voice? If we're meant to see a master on the field, why not pick a game where he has more to do? This movie seems to be very securely anchored in time, but why then not cover THE GAME itself as best you can? In which case, focus those damned cameras on the freaking BALL. You want to emphasize a human star in this game? Then why not shoot every player equally and make your film out of the man who's the most active? What the filmmakers have successfully made here is a huge, long and rich film where nothing frickin' happens. Nothing happens in close up, and then nothing happen in wide shots, then nothing happens on video, then nothing happens in HD. Then something ALMOST happens, then something happens offscreen, when nothing happens on crummy, eye-bleed video. This is such a big pile of nothing.

This is an experiment. Filming Zinedine Zidane during a regular football match during his time with Real Madrid, with 17 cameras, watching each and every of his moves and sometimes showing quotes by the man. That's probably a feast for his fans and followers, but hardly watchable even for regular football fans. The first 20 minutes nothing happens, whatsoever, and the rest of the game isn't exactly a classic either. Zidane walks around a lot, sometimes shows glimpses of his amazing talent. Once Mogwais fantastic soundtrack comes into play and Zidane gets more and more agitated about the game, things do get more interesting. Ironically the movie ends with him being sent off with a red card. For Fans only. But maybe I did it injustice when I started chatting while watching this after 20 minutes.