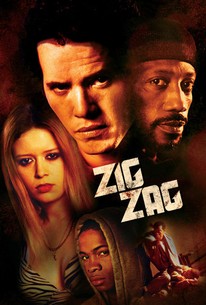 Critics Consensus: Fine performances elevate the movie above the cliches.

Critics Consensus: Fine performances elevate the movie above the cliches.

Critic Consensus: Fine performances elevate the movie above the cliches.

Zigzag is the directorial debut of screenwriter David S. Goyer (Blade, Blade 2). Based on the well-received debut novel by Landon J. Napoleon, the film tells the story of an autistic teenager, Louis "Zigzag" Fletcher (Sam Jones III). Zigzag is a sensitive and thoughtful boy who retreats into his own mind to escape the harshness of his inner-city life, particularly the abuse of his father (Wesley Snipes). His only friend is Singer (John Leguizamo), his compassionate Big Brother, who gives Louis his nickname, and tells the boy he's imbued with special powers. He's trying to get Zigzag removed from his father's home, and also to teach him to survive. Singer has testicular cancer, and is concerned that he won't always be around when the boy needs him. Zigzag works as a dishwasher in a restaurant owned by the Toad (Oliver Platt), an amusingly caustic Southerner. After Zigzag's father demands 200 dollars for rent, the boy sees Toad opening his office safe, and commits the combination to memory. Later, he takes 9,000 dollars from the safe. When he attempts to give his father the rent, his father takes all the money. When Singer finds out what Zigzag has done, he goes to desperate lengths to get the money back, so he can return it to Toad before Zigzag gets into trouble. As Singer's plan goes awry, this brings the pair into contact with a sleazy loan shark (Luke Goss, who was also in Blade 2) and a kindhearted prostitute (Natasha Lyonne). The film's soundtrack was composed by Grant Lee Phillips. Zigzag was shown at the 2002 SXSW Festival.

Miguel A. Núñez Jr.
as Bentley

The movie, despite its rough edges and a tendency to sag in certain places, is wry and engrossing.

A small movie with a big impact.

Goyer's screenplay and direction are thankfully understated, and he has drawn excellent performances from his cast.

The character of ZigZag is not sufficiently developed to support a film constructed around him.

ZigZag might have been richer and more observant if it were less densely plotted.

...the film suffers from an overly meandering pace and a central character that's just not all that interesting.

Heartwarming and gently comic even as the film breaks your heart.

Not at all clear what it's trying to say and even if it were - I doubt it would be all that interesting.

A great ensemble cast can't lift this heartfelt enterprise out of the familiar.

Though Jones and Snipes are enthralling, the movie bogs down in rhetoric and cliché.

There are no featured audience reviews yet. Click the link below to see what others say about Zigzag!