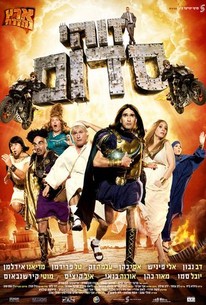 The cast and writers of the wildly popular Israeli comedy series Eretz Nehederet (Wonderful Country) make the leap to the big screen in this blasphemous comedy set during the fall of Sodom - where only one man from the notoriously debauched city will survive the coming catastrophe. When a contemporary traveling salesman (Eyal Kitzis) travels back to Biblical times on a mission to convert Abraham to Judaism, the father of the Israelites refuses upon learning that God has plans to destroy Sodom. Arguing that his cousin Lot ({Dov Navon}) lives in Sodom, and that Lot is a good man, Abraham convinces the salesman to conform his claims before God's wrath is unleashed. As a pair of motorcycle cops arrives in Sodom and begins their search for Lot, they discover a city awash in sin, and the race to rescue the only pious soul in the city begins. ~ Jason Buchanan, Rovi

Critic Reviews for Zohi Sdom (This is Sodom)

There are no critic reviews yet for Zohi Sdom (This is Sodom). Keep checking Rotten Tomatoes for updates!

Audience Reviews for Zohi Sdom (This is Sodom)

A failed spoof that leans more towards, say, Astérix & Obélix than Monty Python, as in being a specific one-laugh joke intended for a certain public and expanded into a movie - and it oscillates too much between witty (some of the jokes do work well) and stupid (most don't).

Zohi Sdom (This is Sodom) Quotes