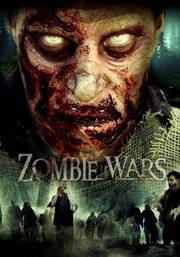 A soldier off at war leaves his wife and daughter behind living with his father. While gone, a zombie apocalypse occurs making it hard for him to get back to his family. He fights his way across the globe and returns home to discover America is ravaged and people survive in small colonies. When he gets home, he discoveries his wife and child were kidnapped by one of the colonies while his father was out gathering supplies. His father and the soldier will stop at nothing to rescue them.

"Does she look of age to you?"
"Fresh pussy is fresh pussy, reverend."
"You need to get your dick wet, you fuck one of those grown bitches."

David Prior, director of Night Claws, Raw Justice, The Lost Platoon, Lock N' Load, Felony, Rapid Fire, Death Chase, Jungle Assault, and Hell on the Battleground, delivers Zombie Warz. The storyline for this picture was way better than I anticipated and reminded me of a cross of Doomsday and Road Warrior. The action scenes are better than anticipated but the acting is absolutely terrible. The cast includes Adam Mayfield, Jim Hazelton, Danielle Jacobs, and John Michael Thomas.

"Don't listen to the doctor. She has a cunt!"

We grabbed this movie from Redbox for Halloween night. At first, we thought this movie was going to be terrible because the script and acting is well below average; however, the settings, costumes, action scenes, and overall plot is way better than you could ever anticipate. I am not ashamed to say we couldn't wait to see how everything turned out. If you're a fan of horror movies, you should catch this picture at least once.

Amanda M
July 7, 2012
I struggled with how to rate this gem, since this is one of those "really great bad movies." Truly hilarious...bad plot, terrible acting, horrendous make-up. I could go on, but I recommend simply because the filmmakers sincerely tried to make a good movie, and failed so terribly that you'll get a good laugh in.

October 29, 2011
This low budget wonder is joining the short list of zombie movies that I won't watch.

Dwayne P
March 14, 2011
Not as bad as some zombie movies I have seen. It's not a hair raiser, but with good friend it's enjoyable.

Deyton M
March 11, 2011
I loved it. Jonathan badeens acting was flawless. It gave the right mood. He instantly became my favorite actor. This movie was great. Period

October 23, 2010
Terrible film with some laughable dialogue! This film has so many plot holes that it is unbelievable. The acting is horrible but not the worst I have seen. Yet, it is a most see film, if you are a film of movies like "the room" and "troll 2" you would enjoy this film. It is just so bad that it's good.

Jennie R
September 13, 2010
Not bad for a very low budget zombie movie. Little far fetched to believe that Zombies could be organized enough to breed humans but -hey- something different. That part of the storyline was not as developed. Zombies looked pretty good considering its low budget and the disembowelments looked decent. Good flick for the Zombie fan.

Jonathan H
June 22, 2010
some kind of film-school project? strange even for a zombie flick, but humorous and entertaining if you can stomach it and have an open mind. zombie film buffs will either like it or despise it, most seem to think it's terrible

Bryan E
½ May 19, 2010
This movie is unbelievably bad, but is such a high recommendation for watch I can give. It so outstandingly bad that it's something anyone with a camera can do. The movie looks like it was edited in Movie Maker and the effects are terrible especially on the decapitations. But it so hilarious it makes it worth watching because it doesn't make any sense. Instant Cult Classic!

Andy N
March 2, 2010
Wow...just...wow. I was bored, Netflix usually recommends to me terrible movies in my instant queue on Xbox Live, so I just pressed play on one and wow...this is movie is just so cheesy bad. Usually I like to laugh at these movies and have a fun time with how retarded they are and this one is basically a gold miners wet dream. Zombies are smart and farming people for food but are still stupid and slow and can't communicate with anything but grunts? This movie will blow you away when it comes to awesome cheese.
Page 1 of 3