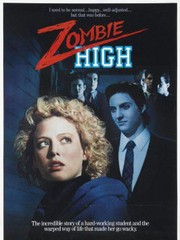 Daryl T
½ December 3, 2014
Wow we've come a long way with the portrayal of zombies. Cheaply made movie with bad acting and worse music

Super Reviewer
Alex r
½ May 2, 2014
Low Budget horror comedy is a forgotten gem of the genre, one that is amusing for fans that are looking for a tongue in cheek horror film to watch. The film features the performance of a young Virginia Madsen. Zombie High overall is a decent time waster with nothing great going for it, but for what it is a, manages to be an entertaining horror comedy that is better than you might think. However it does leave room for improvement, and there are aspects of the film that should have been much better. As it is, it's a decent affair, one that is good for what it tries to accomplish, but at the same time you do want a bit more substance to the film. But that is to be expected from a low budget, Straight to Video title. Despite the movie's shortcomings, Zombie High is entertaining, and for the most parts will surely appeal to diehard horror fans. There are some good ideas that are present within the film, but they never seem to come to fruition due to an underdeveloped script, which if it would have been rewritten and reworked, would surely have been a terrific and memorable horror film. Zombie High is a flawed picture, one that is worth seeing, but it never seems to take off with its interesting ideas, and you can only imagine how good the film might have been if the film's script would have been reworked a bit more. Nonetheless, it's a decent, worthwhile film to watch if you enjoy low budget, cheesy forgotten gems of the genre. The film is decent overall, and it's worth watching, just don't expect a great film with this one, you're surely going to be disappointed.

Lisa J
January 17, 2014
When zombies are chasing me and very close behind me, I always make sure to stop and put on my helmet before escaping on my motorcycle.

D M
½ September 17, 2013
The title is terribly misleading as the "zombies" are of the pre 1960s film variety, ie mind-controlled dummies. A gal gets a scholarship to an all boys boarding school. When her teacher crushes on her she learns of the experiments the staff performs on the student. Some hijinks happen. Predictable ending. Funny stuff not funny, scary stuff not scary.

1) It was Virginia Madsen's 10th movie, and among her earliest leading roles.
2) Sherilyn Fenn (billed as 'Sherilynn') is her roommate. This was her 6th movie, and a year before capturing attention in Two Moon Junction.
3) Although set in a preparatory school, none of the cast looks younger than 22.
4) Madsen introduces herself as Andrea (ANN-dree-ah) but nobody pronounces it the same, from ON-dree-uh to even her boyfriend Barry always getting it wrong with ahn-DRAY-uh. So there's your drinking game.
5) There are no zombies in Zombie High and Andrea even declares, "You're all a bunch of vampires!"
6) The wretched music score is among the worst ever heard, from the awful synth lovesongs that would embarrass Billy Ocean to the ill-advised use of freeform jazz drum fills during scenes intended to increase tension. Furthermore the soundtrack is mixed too loudly, often drowning out dialogue.
7) Zombie High is among the least horrifying horror movies you will find.
8) There are more intentional laughs (two) than scares (zero).
9) There are more unintentional laughs (about five) than intentional ones.
10) Zombie High was partially funded by the USC School of Film & TV and does not represent a positive endorsement for enrollment.
11) Plot of student mind control reminiscent of 1998's The Faculty.
12) "We are only here today because of my discretion!" professor Philo declares after a loud discussion in a public area about their secret experiments.
13) It's daytime, no wait, now it's night. It's day! It's night! A week has passed, or was that a month? Do not expect a coherent passage of time.
14) Credits disclaimer states that "any similarity to persons living, dead, or undead is coincidental "

"I thought you'd gone, you said you didn't want to be here anymore."
"Well...I changed my mind."

FilmGrinder S
May 9, 2013
Robert Rodriguez does it better with THE FACULTY, slightly tweaked of course.

Karen U
January 20, 2012
Slow to start, no death or gore for the first 45 minutes. However, the prom scene is worth the price of admission!
Lots of laughs here, intentional or otherwise.

Lĺëílă B
March 4, 2011
Pretty boring for the most part but the end definitely saved it from being total crap. Rock n Roll saves the world. Natch.

Hollie T
½ February 1, 2011
This took me DAYS to finish..it wa pretty horrible and MST3K worthy. Please, Virginia Madsen is NOT young enough to be in high school...

Jennie R
January 16, 2011
A fun 80's movie that includes a young Virgina Madsen & Sherilyn Fenn. I was disappointed to find that the title is very misleading. There are no zombies in this film. Robots maybe but not zombies. Had I seen this movie in the 80's, I would loved it. It is a combination of "Disturbing Behavior" and "The Stepford Wives". Since I have seen both, this movie seemed predictable and a touch corny.

Al M
January 15, 2011
A campy, stupid film that is still thoroughly entertaining, partly due no doubt to these early performance by Virginia (Candyman) Madsen and Sherilyn (Twin Peaks) Finn. Zombie High is not a zombie film in the classic sense of the term. It does not concern reanimated corpses on a quest for flesh. Instead, it is about a boarding school where the faculty are carrying out Clockwork Orange style experiments that render the students docile, obedient, and completely preppy. As dumb as a film can be, Zombie High is enjoyable as a piece of cheesetastic 80s horror.

I have Riboflavin flavored blood
½ January 2, 2009
not your typical zombie movie its alright but not great by any means

September 9, 2008
Totally agree with this movie.

James H
½ May 28, 2005
ULTRA CHEAP AND ULTRA STUPID. IT IS ALONG THE LINES OF THE STEPFORD WIVES, BUT NOT ANYWHERE NEAR AS GOOD. HARD TO BELIEVE STAR MADSEN HAS ACTUALLY BEEN NOMINATED FOR AN OSCAR SINCE SHE MADE THIS MESS.
Page 1 of 1