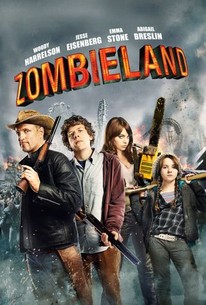 Critics Consensus: Wickedly funny and featuring plenty of gore, Zombieland is proof that the zombie subgenre is far from dead.

Critics Consensus: Wickedly funny and featuring plenty of gore, Zombieland is proof that the zombie subgenre is far from dead.

Critic Consensus: Wickedly funny and featuring plenty of gore, Zombieland is proof that the zombie subgenre is far from dead.

A cowardly shut-in named Columbus (Jesse Eisenberg) is forced to join up with a seasoned zombie slayer named Tallahassee (Woody Harrelson) in order to survive the zombie apocalypse. As Tallahassee sets out on a mission to find the last Twinkie on Earth, the duo meets up with Wichita (Emma Stone) and Little Rock (Abigail Breslin), two young girls who have resorted to some rather unorthodox methods to survive amidst the chaos. Reluctant partners in the battle against the undead, all four soon begin to wonder if it might be better to simply take their chances alone. ~ Jason Buchanan, Rovi

Bill Murray
as Himself

It's an okay DVD rental choice but doesn't go beyond that.

With its quick pace and witty writing, it's a nonstop, snarky ride.

It is never properly scary. Mostly, it is just very silly, but because the film knows it is silly, it's all rather infectious and not the big, cliché-pumped bore it might otherwise have been.

Warts, entrails and all, I had a ball at Zombieland. It's 81 minutes of my kind of stupid.

Woody Harrelson has a rip-roaring time in this comic splatterfest as a redneck from hell who is out to kill zombies. It's the kind of genre acting that doesn't get much notice, but it's a gleeful rampage of a performance.

Packed with the genre's standard overdose of blood and guts. Add in a charming band of misfits and you get something thrilling, hilarious and sweet, all at the same time.

If, like I once did, you thought Shaun of the Dead was the last word in zombie-comedy, you were dead wrong.

...the whole film is something of a carefree blast...

Complete with spectacular gore, creative cursing, outrageous slow-motion ransacking, a modest amount of romance, and a tour of the palatial Bill Murray estate.

If you thought Shaun of the Dead delivered the last word in Zombie horror-comedy, Zombieland shows that you can still get fresh laughs from the festering carcasses of the living dead.

In an extended cameo, Bill Murray shows up with his own brand of dry, yet over-the-top humor that may very well serve as the film's highlight.

A highly enjoyable and funny zombie road movie that blends ironic comedy and gore fest in a way that will make you laugh out loud in many improbable moments. Also, Bill Murray and Woody Harrelson are hilarious, and I really love the soundtrack.

This movie has many things I love: it's a zombie movie, it's a road movie, it's a horror comedy, it's gory, but at the same time, it has some substance, but it's not overbearing. Mostly this movie is just really fun and hugely entertaining, which is probably the most important factor. The script is decent, and contains the right amount of wit and quirk without seeming derivative. There's sone real cleverness with the title sequence and the presentation of Columbus' "rules"-they are flashy, yet remain the punctuation, not the sentence. The performances are great. Each player is perfect for their respective roles. Jesse Eisenberg rivals only Michael Cera for the king of deadpan geeky quirk. Harrelson is having the time of his life, and Stone and Breslin prove that chicks can be pretty and kick ass, too. It isn't for me as good as Romero's stuff or Shaun of the Dead, but it takes the best from each camp, and makes it into its own little thing. The wonderful not quite a surprise cameo around the middle definitely serves as the cherry on top of a beautiful mound of ice cream, but the soundtrack kicks much ass as well- especially the usage of one of my favorite songs by one of my favorite bands during the opening credits sequence. Obviously I recommend this movie, so do yourself a favor, and check it out. There are far worse ways to spend a night at home.

Its nice to see another Zombie/Comedy film after the success of 'Shaun of The Dead'. Featuring a superb cast of Woody Harrelson, Jesse Eisenberg, Emma Stone and a fantastic cameo from *SPOILER REMOVED*. 'Zombieland' also features both creepy scenarios and nice humour. For those who are any form of zombie fan, this is a nice guide for surviving the undead.

I havent laughed like this in a while. I just had a good time w this movie!! It was just a lot of fun!! what a move experience should be.