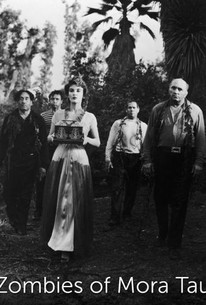 Quickie king Sam Katzman's Zombies of Mora Tau is a game attempt to imitate what Roger Corman was doing so well over at American-International. The story takes place on the coast of Africa, where a race of white zombies jealously guards an ancient, jewel-encrusted African Idol. The treasure rests somewhere under the sea, and adventurers Jeff Clark (Gregg Palmer) and George Harrison (Joel Ashley) intend to get their hands on it. Before long, Jeff and George are in danger of being zombified themselves. Jeff's solution to this dilemma is surprisingly bland, bringing this otherwise rousing melodrama to a flat conclusion. Allison Hayes, of Attack of the 50 Foot Woman fame, is decorative as George's wife, who has the misfortunate to fall under the spell of the "living dead". Zombies of Mora Tau was originally released on a double bill with Katzman's The Man Who Turned to Stone.

You should beware that it's a Sam Katzman production, someone known for producing schlock.

There are no featured audience reviews yet. Click the link below to see what others say about Zombies of Mora Tau!