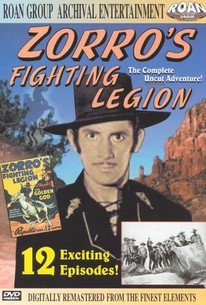 In 1824, Benito Juarez (Carlton Young), the president of the new Mexican Republic, worries that vitally important gold shipments from the San Mendolito Mines shall never reach Mexico City. The president's understandable fears are quelled, however, by local nobleman Don Francisco (Guy D'Ennery), who is organizing a "fighting legion" to protect the shipments and thus the safety of the six months old republic. Secretly opposing Juarez' endeavors are a group of influential capitalists, one of whom masquerades as Don del Oro, an ancient god of the local Yaqui Indian tribe. But when Don Francisco is killed by persons unknown, a visiting relative from California, handsome and affable Don Diego (Reed Hadley), assumes the disguise of Zorro to lead the legion in search of the identity behind the homicidal Don del Oro. To keep his own identity a secret, Don Diego acts the foppish dude, much to the dismay of his pretty cousin Volita (Sheila Darcy), who denounces him as a coward that could learn a thing or two from Zorro. Meanwhile, the Yaquis, acting on a command from Don del Oro, do indeed attack the gold shipment but are foiled by Zorro and the Legion. Just then an explosion set off by white henchmen Moreno (James Pierce) and Valdez (Charles King) causes an avalanche right in Zorro's path, making his sad demise almost a certainty.

There are no featured audience reviews yet. Click the link below to see what others say about Zorro's Fighting Legion!