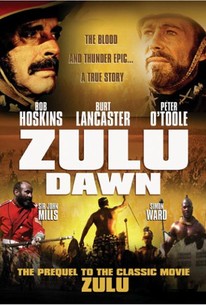 A prequel to Zulu, Zulu Dawn depicts the events prior to a devastating battle that occurred in 1879 in which 1,500 British soldiers were killed by Zulu warriors. This film portrays the growing tensions between the Zulu tribal factions and the British colonists. With Peter O'Toole and Burt Lancaster.

Rides the line between being a pure artifact of a bygone era-one that depicts a romanticized, unrealistic version of the time-and a modern, revisionist take that strives for a more accurate portrayal of historical reality.

A simple two-act story: Prelude to war, and the war. The former is concerned with a lot of British derring-do and priggish behavior. The latter consists of battle scenes with a lot of kinetic energy but not as much emotional punch as they should have.

A rousing visual spectacle that's a prequel of the Cy Endfield directed Zulu (1964).

Seen today, it's not only a startling indictment of British imperialism, but it seems a remarkably forward-thinking work.

Considering the epic magnitude of the screenplay and the diverse cast, this should have been much, much better. Directorialy flat and unimaginative.

This film must be the most under-rated film of its time. It is a very accurate depiction of the battle of Isandhlwana and the massacre of the British Soldiers. The casting was brilliant, Burt Lancaster and Simon Ward were outstanding in the lead roles. The film following the lives of very different people through a very short timespan was very well done baring in mind the amount of people the film focused on, from a native south african messenger, to an arrogant British General. The film was fair to both armies that fought on that day and deserves to be recognised as a movie epic.