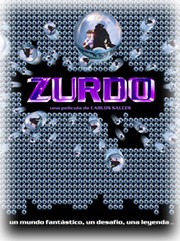 Catherine D
½ March 23, 2010
Z is for Zurdo.
And there it is: 26 films in as many days. My Rotten Tomatoes journal has had a worthy 5th anniversary.
10-year-old Zurdo (Spanish for "Lefty") certainly doesn't have it easy. The child of a single mom, he spends his days suffering through school (where his teacher binds his left hand to make him use his right) and delivering the lunches and laundry that his mother spends all her time toiling over. But in those few precious moments of free time, there is nothing Zurdo loves to do more than shoot marbles, to the cheering of his best friend. And he's good at it - he's never lost, and has many jars of won marbles to prove it. News of this gets around, and soon a champion from a far-away village, the "Wizard of Santa Maria" has come to challenge Zurdo to a match. The date is set and the whole town gets involved, betting amounts far above and beyond their means to show their support for Zurdo. Then again, not everyone is rooting for the home team: the rich man and the police commandant decide to play the odds for the opposition, and then blackmail Zurdo into throwing the match, first by threatening his uncle, then his mother. Zurdo is torn, but ultimately decides to play his best and go for a win, which he achieves only by cutting his own left hand in order to gain the final deciding point. Upon his victory, the commandant tries to shoot Zurdo but instead hits his long-lost father, who is thereby revealed (and recovers from his wounds, unlike the commandant, who meets his end as every villain should). So Zurdo claims the day but gives up marble-shooting thereafter, instead gaining his father back again.
Yes, admittedly this Mexican film was my desperation to find a title that began with Z. If this film was made for anything more than $50,000, someone was definitely wasting money. The acting is uniformly dreadful. The art direction is basic and the direction only interesting in that it takes the perspective of its 10-year-old protagonist (i.e. the bad adults are seen looming large over us). The special effects would be worthy if the film had been made 20 years before. The production just seemed like a bad TV movie: the snow was clearly speckled grey and black and looked more like ashes, and the rain was remarkably responsive to directorial cues. And the plot - well, it's something I'd never think to make into a movie, probably because it's a terrible idea. Not that a child-like morality play featuring marbles isn't interesting, but not when it includes prostitutes, street punks, robberies, kidnapping, and violent murders.
Overall, a bizarre film with terrible production, far too graphic for a child but simplistic and silly to an adult, a mishmash of genres and ideas, none of which are really developed.

Charles W
August 25, 2008
Imaginative story-telling coupled with surprising production value. A tad more intense than a kid's movie from the states, but still rewarding and fulfilling, plus has a cool soundtrack done by Paul Van Dyk.

Joe has gained a level!
½ May 9, 2008
I get asked to destroy this movie at work like a million times but I think someone hid it so I can never find it. It gets a half star for being a jerk movie.

Super Reviewer
Quinto W
February 19, 2008
The film takes itself too seriously, cramming too many themes and not exploring them enough, that it makes the film verge on camp. Luckily for it, it's still an entertaining movie and Eugenio Derbéz has very little screen time.

Chucho E. Q
½ February 19, 2008
Between deciding if this is kitsch, camp or simply not futuristic enough, you'll miss an absolutely entertaining film with a truly original point of view on what a children's movie should be. The performances are great and the art direction is delicious even if the special effects aren't good enough for the necessities of the film. The music by Paul Van Dyk is exciting.

Private U
February 9, 2008
This is one of my favorite Spanish-language movies. I even got a little choked up at the end.

Roberto M
½ August 5, 2007
A strangely science-fiction inquisition into the story of a young Mexican boy who becomes his degraded town's local hero after having gained his status as the best marble player around. As the local town plots and gambles huge amounts of money on Zurdo winning a marble competition against a rival town's 'just as talented' marble player, Zurdo feels the effects of being split between being pressured to win or to lose on account of the safety of his mother.

A surprisingly entertaining movie with an even more innovative concept, executed in a manner that communicates a high budget and stylistic artistic direction. A dirt-ridden community becomes transformed into something special.

This movie, however, does drag slightly and the second half of the film does not seem to equivicate the grace and charm of the first. Still very much worth seeing.

Brian P
½ December 10, 2006
Waste of TIME!! Very Weak movie, DO NOT WATCH, if you do end up watching it, side effects may include: Suicide, murder ramapages, road ramapage, any kinds of ways of harming yourself, and many others...