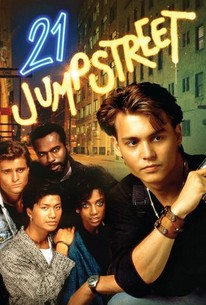 Critics Consensus: 21 Jump Street sports a likable and charismatic cast, but the series is more maudlin than hip with its earnest embrace of a cheesy premise and an offensive reliance on racial stereotypes.

Critic Consensus: 21 Jump Street sports a likable and charismatic cast, but the series is more maudlin than hip with its earnest embrace of a cheesy premise and an offensive reliance on racial stereotypes.

Young L.A. cops go undercover in high schools in this teen-oriented police drama, which helped jump-start the new Fox network in 1987. It was the network's most-watched show that first year, and Booker became an insurance investigator who spun off to his own short-lived series. The title, incidentally, is the address of the unit's station house, a converted chapel.

Johnny Depp
as Off. Tom Hanson

Peter DeLuise
as Off. Doug Penhall

Pilot Pilot (Episode 2) America, What a Town Don't Pet the Teacher My Future's So Bright, I Gotta Wear Shades The Worst Night of Your Life Gotta Finish the Riff Bad Influence Blind Sided Next Generation

Cinematically, you have your stock angles, a few continuity errors and some garish lighting. But the ensemble starts strong and only grows stronger through the season.

It was created to be ultra-hip in a different era; that's always a recipe for later goofiness. But it's also kinder and gentler than many modern shows.

Racial clichés are shocking in any show, but especially in a show for kids.

After a hasty, rather ignominious replacement of the hippie-dippy Jump Street captain played by Frederic Forrest with Steven Williams's stern father figure, everything finally gels.

It's easy to hear the sales pitch: Miami Vice in high school. The problem is, none of the officers are even mildly convincing as teenagers.

Jim Scott
Under the Radar

The young, diverse cast had tremendous chemistry. This group happened to feature an immediate star right out of the gate, and the writers quickly started crafting episodes that played to the chameleon-like talents of Johnny Depp.

Such daring remains admirable, yet the corny scripts, frightwigs and Bontempi keyboard soundtrack are incredibly dated.

21 Jump Street is less interested in complications than in standard action, complete with a pop rock album providing the music track for each episode.

the show started out unarrestingly, with overacting and flat plots. But the sting picked up speed when... a hokey yet amusing repartee grew between pretty-boy Depp and lug-head partner Peter DeLuise.

There are no featured audience reviews yet. Click the link below to see what others say about 21 Jump Street: Season 1!