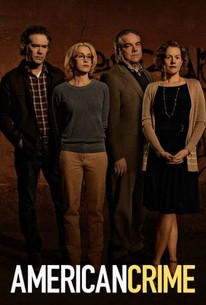 The first season of this anthology crime drama focuses on the aftermath and investigation of the murder of a veteran, Matt Skokie (Grant Merritt), and brutal assault of his wife, Gwen (Kira Pozehl). The story centers around the impact of the event on the victims' families, as well as the suspects and their loved ones. Matt's parents, Barb (Felicity Huffman) and her estranged ex-husband Russ (Timothy Hutton), struggle to cope with their son's death while relentlessly seeking to bring his killer to justice. They also clash with Gwen's parents, Tom (W. Earl Brown) and Eve (Penelope Ann Miller), as they endure the legal investigation and discover dark secrets about their children along the way. The narrative also follows the lives of the various suspects and examines the racial tensions that are prevalent within the legal system. The cast also features Richard Cabral, Caitlin Gerard, Elvis Nolasco, Benito Martinez and Johnny Ortiz.

Grady McCardell
as CO in Hallway

Jack Watkins
as Darrel
View All

This is an unflinching undertaking that is not only worth watching, but one that will inspire deep thought and dialogue long after the credits have rolled.

Rather than let human connections on screen create naturally empathetic feelings in the audience, each scene is driven home with a blunt force too heavy for the story's strengths.

It's well worth a watch for the exceptional acting and the solid writing and directing.

The characters interact, the camera observes. And we marvel -- not only at the technique and the acting, but at the fullness of each individual point of view, detailing who these people are and how they got there.

What it lacks in fun, it makes up for in intelligence, complexity, and boldness. It's a network show about heavy, difficult, uncomfortable topics, and it expects, quite simply, an audience. It deserves one, too.

I can say that American Crime is indeed filled with some impressive material, if you can get past the pretensions.

At times, it becomes so self-serious it's almost satirical.

American Crime is willfully difficult, refreshingly so. The rotating array of perspectives is fascinating, and it keeps the viewer off balance in a novel way.

American Crime is an uncomfortable series, a drama that delves into underground conflicts that come to light at the worst possible time. [Full Review in Spanish]