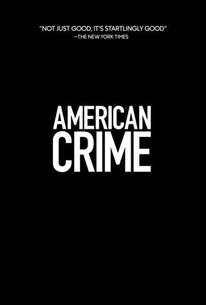 The second season of American Crime is set in the U.S. Midwest -- representative of the canvas that is America -- at two high schools, one public and one private. Issues of sexual orientation and socioeconomic disparity come to a boil when lurid photos of a high school boy, Taylor Blaine, are posted on social media following a school party. Circumstances become more complicated when Taylor accuses two players on an elite private high school's championship basketball team, Kevin LaCroix and Eric Tanner, of drugging, assaulting and then posting the pictures of him online. --(C) ABC

Gage Self
as Performance Dancer #10

Andy Noble
as Choreographer
View All

John Ridley's American Crime is one of television's most underrated shows, and one of its most consistently engaging on an artistic level.

American Crime will again remind viewers that there is no justice. There is no way to win... Whether or not you believe that is up to you, but I'd be hard-pressed to see how exemplifying the worst of society is meant to better it.

Combined with Ridley's unblinkingly intimate cinematic style... this is uncomfortable television about uncomfortable topics. And we could use more of it.

You're left with an unsettling feeling that even when the truth does surface the story won't be tied up with a neat little bow as it would be in so many other crime dramas on television.

American Crime returns... with a fresh story and relevant concerns probing a range of American blind spots. The topical, Emmy-nominated anthology on ABC continues to feel like an artful work of premium cable.

Riveting from the first minute, with stellar, resonant performances driving a story with a high fiber content. American Crime doesn't flinch -- or preach. But it does teach in ways that send it to the head of the class of 2016.

It's certainly very heavy, dull material, but its relentless pursuit of examining the rampant social injustices of the modern world has a certainly nobility to it, even if American Crime greatly exaggerates that sense of importance.

Through its pointed cinematography, fluid editing, and deft manipulations of sound, American Crime achieves visual elegance and sonic engagement like no other network program before it.

American Crime is a rare work in the current television scene. [Full Review in Spanish]

The ongoing second season, which involves the alleged homosexual rape of a white student-sensitively and credibly played by Connor Jessup-at a party held by the basketball team of an integrated charter school, is much better.