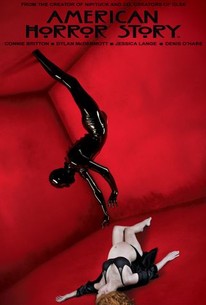 The first season of Ryan Murphy's "American Horror Story" begins as Ben (Dylan McDermott), Vivien (Connie Britton), and their daughter Violet (Taissa Farmiga) move into a restored mansion in Los Angeles after Ben's extramarital affair leaves the Harmon family in serious need of a fresh start. Their neighbour, Constance Langdon (a role which would eventually win Jessica Lange the Golden Globe for Best Supporting Actress), wastes no time in becoming a persistent, albeit not entirely welcome presence in their lives, as does her son, Tate (Evan Peters), who Ben believes is a sociopath. Shortly after moving in, the Harmons discover that several violent murders were committed in their new home, which locals have nicknamed "The Murder House", and a series of increasingly disturbing events indicate they may be sharing their home with the restless and violent spirits of those killed.

Gregory Sporleder
as Off. McCormick

It feels more like the place where old horror movies have come to die.

Viewers who like the horror genre and the offbeat Murphy/Falchuk approach, and who are willing to put in enough serious time to absorb all the nuances, will fall in love.

This gourmet junk food gives you some pure evil, and it takes some axes to some evildoers, and the American type represented has a predilection for French maids. Bon appetit.

It's a lot to process, and at times too much to take. Still, Horror Story often is a wonder.

Amusing to watch, but not particularly scary. "Creepy" seems the better word.

There is no inherent value to AHS.

For a first season, it wasn't that bad.

To Murphy and Falchuk's credit, the brisk tempo serves the multiple converging plotlines well, allowing weirdness to befall everyone in their own unique way, while producing a myriad of questions for the viewer to ponder.

Prime time is so full of mainstream pabulum these days that when a work as audacious and ambitious as American Horror Story comes along, some of us feel compelled to embrace it. Most TV shows quickly fade from memory. This one will haunt your dreams.

Strange show that is deeply twisted, one of the most unpredictable things I've seen for quite sometime

A great start to a unique series, even if it gets convoluted and hard to follow by the middle. It's high enjoyable and the acting is simply fantastic. It's nice to have a good horror television series on that doesn't pull any punches. I'm looking forward to future seasons.

A cohesive meshing of several horror stories focusing on a haunted mansion in the suburbs.

Sexy, scary and uber-stylish, the campy anthology show AHS opens with a bang and refuses to fizzle right until the end where it doesn't sparkle for as long as its audience had hoped. It's unfortunately too drawn-out and the liveliness of the show doesn't appeal as much towards the end as it begins to take itself too seriously. It's still incredibly fun to watch and features a gimp ghost and Frances Conroy, what's not to love?