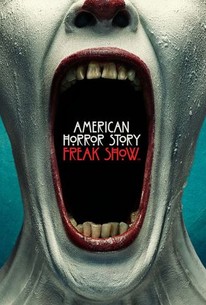 Critics Consensus: Though it may turn off new viewers unaccustomed to its unabashed weirdness, Freak Show still brings the thrills, thanks to its reliably stylish presentation and game cast.

Critic Consensus: Though it may turn off new viewers unaccustomed to its unabashed weirdness, Freak Show still brings the thrills, thanks to its reliably stylish presentation and game cast.

American Horror Story: Freak Show begins its tale in the quiet, sleepy hamlet of Jupiter, Florida. The year is 1952. A troupe of curiosities has just arrived to town, coinciding with the strange emergence of a dark entity that savagely threatens the lives of townsfolk and freaks alike. This is the story of the performers and their desperate journey of survival amidst the dying world of the American carny experience.-- (C) FX

Denis O'Hare
as Stanley
View All

Speaking of scary: There's a clown. And not just any scary clown, but the scariest clown ever, a gruesome killer with a huge smile hideous enough to make us apologize to any ordinary clown we ever called scary.

Like all great horror, it is willing to abuse its audience-which, in a perfectly Murphian turn, wants to be abused.

Murphy is in full ringleader mode here, the Barnum & the Bailey of television insanity.

The appalling splendor is right there in credits. Credit sequences are an "AHS" specialty, but the FX franchise pretty much outdoes itself with this one.

Freak Show looks like a beauty, with a wealth of fascinating characters and a little smattering of heart helping to balance out the grisly appointed rounds of a so far unidentified clown with a hellish half-mask.

Freakshow had everything I could ask for from American Horror Story; lots of blood, cringe-worthy horror, jaw-dropping moments..., and most of all a GREAT VILLAIN!

Subtlety has never been creator Ryan Murphy's strong suit, but Murphy (who also wrote and directed tonight's premiere) seems to have fully embraced that approach, delivering what appears to be both the most horrifying and joyful season yet.

The first hour of AHS: Freak Show, with its amazing new title sequence, odd characters, gorgeous production values and depiction of a dying show-biz era, totally pulled me in. But I'm a sucker for the nostalgia and the creepiness of the sideshow world.

Mesmerizing characters, a perfectly realized atmosphere and one truly terrifying clown could make American Horror Story: Freak Show the most deliciously creepy and captivating season yet.

Isaac Feldberg
We Got This Covered

The problem with Freak Show is that the more we get to know these people, the less there is to like... Feak Show invites us to gawk at various people with disabilities and feel good doing it.

Since its bloody beginnings, American Horror Story has been known for its macabre settings, dark plotlines, and highly intricate storytelling, along with insanely unexpected twists and gallons of bloodshed. Each season—or rather, miniseries—has presented us with a new sinister and gripping nightmare to decipher. For those who have yet to watch American Horror Story, it is important to note that each season is a story in-and-of-itself. Mostly the same actors return for the recurring seasons, but as entirely new characters with different names, backgrounds, and storylines. AHS prides itself on being able to bring something new to the table with every season, ranging from historical time periods to resounding statements on infidelity, insanity, oppression, and discrimination. The first series, Murder House, follows the Harmon family as they move into their new home, which they soon discover was the location of over 20 murders and suicides. The Harmon family struggles with both internal and external demons that haunt them, escalating to a violently climactic finale. The second series, Asylum, takes place at a mental institution in the 1960s, where patients are subject to cruel and inhumane treatment. A deep sense of dread and terror harbors over the asylum as it delves into plots involving demon possession and extraterrestrial abduction. The third series, and arguably the fan favorite, is Coven. As suggested by the title, the season follows a coven of witches as they defend their territory against voodoo practitioners and witch hunters attempting to harm them. Coven is, by far, the best-rated and most watched AHS season to date. This brings us to season four of American Horror Story, entitled Freak Show. With only two episodes under its belt, AHS has taken on a very different and arguably more discomforting tale of terror than its usual supernatural route. Freak Show takes place in the town of Jupiter, Florida in 1952. It focuses on a group of—you guessed it—freaks. The disfigured, the deranged, and human oddities from all around the world that have been ridiculed and banished from the “normal world” take refuge in Freak Show, a struggling carnival and circus performance that is run by Elsa Mars. The “freaks” in AHS: Freak Show come in all shapes and sizes: The Bearded Lady; Legless Suzi; Bette and Dot, the Siamese sisters; Paul the Illustrated Seal, who has a seal-like body; Lobster Boy, who has hand deformities; Meep, a small man from the jungle whose specialty is biting off the heads of chickens; Ma Petite, a tiny Indian woman who is small enough to fit in bird cages. And the list goes on. Best of all, Freak Show also follows the agitating and gratuitously gory serial murders of Twisty, a terrifying clown whose horrific glare can frighten even the bravest of horror fanatics. Although he is only side-plot at this point, one can already assume he will join the Freak Show soon. With its infamous Halloween episodes (comprised of two parts) coming up in the following two weeks, fans can expect AHS: Freak Show to swing into full gear. It has had a highly promising start, and the series can only escalate in suspense and carnage from here—as expected from any season of AHS. However, Freak Show feels more humanistic and empathic than its previous seasons. It’s a tale of discrimination against those that are different and misunderstood. Furthermore, it delves into the struggles of identity and survival for these individuals. They want to be seen as people, not merely sideshow attractions, yet they understand this is the best they can do as a result of their deformities and feelings of disconnect from the societal norm. This season has definitely brought a new ambiance to the American Horror Story anthology, and as a devout fan, I cannot wait to see where they take the series from here. Be sure to catch AHS: Freak Show every Wednesday night at 10/9c. And a word of warning: If you have a deathly fear of clowns, I sincerely wish you the best of luck getting through this season.

Some top rung imagery and acting chops blends with some subpar storytelling, in this more or less acceptable fourth season of American Horror Story.

Although it will turn off the usual viewer of the previous installements, Freak Show exquisitely becomes one of the show's best, with a cast that gives it all empowerging a premise following everything peculiar within its themes, supported by a quircky and coercive presentation, bringing the elements of 'horror' and 'story' to a new light.

I really really wanted to enjoy Freakshow, but unfortunately it's not to my taste. Generally it's very well made and features impressive performances from the entirety of its ensemble cast, the ideas are great (a 50's freakshow/circus persecuted for who they are, what they are and the murders that have rocked the town of Jupiter, Florida). Freakshow features many good things like the unfortunately short-lived serial killer Twisty The Clown, the refreshingly attractive musical numbers, the episode "Orphans" and a sudden compassion to draw links between the series'. AHS works better when it takes itself less seriously, so it doesn't surpass the previous three entries.