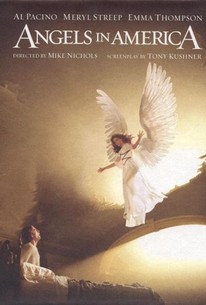 Brilliant adaptation of Tony Kushner's award-winning play about the dawn of AIDS in the 1980s, focusing on a powerful lawyer, a scion of a wealthy family and a Mormon couple in New York City. HBO originally presented this 351-minute film in two parts, but also aired it in six one-hour installments.

Justin Kirk
as Prior Walter

Michael Gambon
as Prior No. 1

Simon Callow
as Prior No. 2
View All

Under director Nichols, Angels in America receives its definitive treatment and emerges as a vivid but exhausting experience. The great revelation is the cast, which proves there's no special effect equal to heartfelt acting.

Note-perfectly written for the screen by its playwright, Tony Kushner, the adaptation is as trenchant, poetic, fantastical, and moving as its source -- with the added thrill of an up-close cinematic approach.

Ultimately... the real problem is that Angels is and remains a play, not a movie.

Angels in America is millennial, prophetic, funny and moving. Above all, it is vital viewing.

Every performance draws you in and holds you in its grip, and Nichols directs with such inventiveness that Angels in America doesn't seem like a televised play at all but its own full-blown original movie.

Meryl Streep gave the performance of the year in any medium with her flawless disappearing act into (among others) a tenacious Mormon matron, a wily (male) rabbi, and the wry and vengeful specter of Ethel Rosenberg.

I find the series far too pretentious and posturing; it forces itself on the viewer, and doesn't cease until the final credits role.

Framed inside a smaller box, Angels is contained and drained; it bogs down, betrays its seams and patches; its lofty scaffolding creaks.

"Angels in America" is one of the most dazzling movies ever made for television or any other means of projecting a film, but it dazzles the mind as well as the eye.

Discuss Angels in America on our TV talk forum!