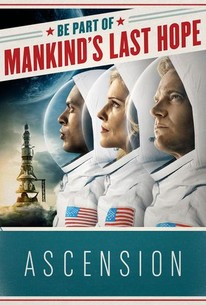 Critics Consensus: The characters in Ascension lack the depth that is necessary for its dramatic elements, but its premise may be smart enough to hold the interest of sci-fi fans.

Critic Consensus: The characters in Ascension lack the depth that is necessary for its dramatic elements, but its premise may be smart enough to hold the interest of sci-fi fans.

"Ascension," a six-part miniseries, follows the inhabitants of starship Ascension, launched in 1963 as part of a secret U.S. space mission meant to populate a new world. As passengers celebrate reaching the halfway mark of the ship's century-long voyage, a murder occurs. At the request of the Captain (Brian Van Holt), Executive Officer Aaron Gault (Brandon P. Bell) investigates the crime. As inquiries continue, tensions rise, raising questions aboard ship. Unbeknownst to the passengers, questions are also being raised on Earth.

All things considered, Ascension is a rather fun way to spend a few of my evenings.

An intriguing sci-fi premise becomes seriously less so. The first episode is worth watching for the buildup and the surprise, but many viewers will abandon spaceship at the end.

The problems presented in the show's first hour are fairly superficial, and -- barring a drastic midseries turn -- that's unlikely to change.

Clearly, there are lots of things to like about Ascension. The characters are well-enough developed in the early going that I could actually have done without the murder mystery - or, for that matter, the space strangeness.

Syfy taps into a couple of resonant themes with Ascension, and tells the story well if not very subtly.

Ascension is hokey and hyper-staged. But there's a twist at the end of the first night that should have you coming back.

Ascension was science fiction without science, character-driven narrative without characters and a story so lacking in interest that this could be the cure for insomnia.

The way it's going, though, Ascension seems more interested in its characters' affairs than the strange, terrifying, miraculous world it's created.

But some of the acting is questionable at best.

It is excellent science fiction, and I urge such minded individuals to watch it. And be patient with it.

There are no featured audience reviews yet. Click the link below to see what others say about Ascension: Season 1!