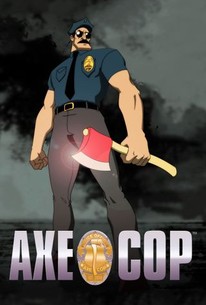 Critics Consensus: Axe Cop is a subversive farce sprung from the mind of a child, giving the series a gleefully anarchic imagination to counterbalance its more sophomoric indulgences.

Critic Consensus: Axe Cop is a subversive farce sprung from the mind of a child, giving the series a gleefully anarchic imagination to counterbalance its more sophomoric indulgences.

Adapted from a comic created by two brothers, Malachai and Ethan Nicolle, who were 5 and 29, respectively, when they hatched the idea, this animated series follows the exploits of the titular axe-wielding police officer (voice of Nick Offerman), a no-nonsense crime fighter who gets by on two minutes of sleep per night and eats only cake. Axe Cop's friends include his partner, Flute Cop (voice of Ken Marino), and fellow do-gooder Sockarang (voice of Patton Oswalt), and his adventures take him to Zombie Island and South Pole World?just don't ask him to babysit. Other voices include Megan Mullally, Vincent Kartheiser, Rob Huebel, Giancarlo Esposito and Jared Harris.

Megan Mullally
as Isabella/Queen of England

Tyler, the Creator
as Liborg

Alex Rubin
as The Kid

Jared Harris
as King of England

Once we know we're inside the brain of an imaginative 5-year-old, the show is hilarious and even occasionally touching.

Viewers will hear plenty of body humor and see distasteful images such as "bad guys" who are piles of poop come to life.

Axe Cop is an absolute psychopath in the funniest way possible.

Axe Cop...is completely absurd and often hilarious, especially when you consider its pedigree.

It all adds up to a brightly colored vision of a world drained of anything that wouldn't inspire a fist pump and a cry of "Awesome!"

For all the chaos and collateral damage induced by Axe Cop, there's a leavening positivity to the proceedings, the inevitable byproduct of a series partially inspired by the ideas of an 8-year-old boy.

The animation is serviceable, and the show gets a vital boost from the voice performance of Nick Offerman.

The martini-dry writing is full of knowing genre winks.

There are no featured audience reviews yet. Click the link below to see what others say about Axe Cop: Season 1!